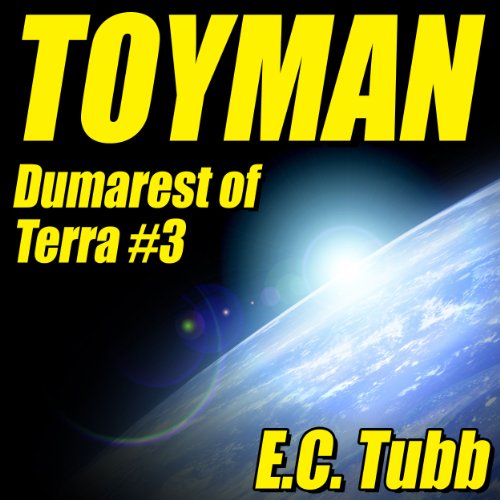 The planet Toy was a bauble of a world, designed for the pleasure of those who owned it. It was founded long ago as a corporate Utopia, and had the oldest computer banks in the Galaxy.

Now Toy was in the hands of a decadent young Toy Master, whose greatest pleasure was the pain of others.

Dumarest had come to Toy to consult the great Library, in hopes of locating long-lost Earth. He stayed to fight for his life.

Would you listen to Toyman again? Why?

I very likely will listen to Toyman again because it is a classic. It's ostensibly just a simple action/adventure space traveler story -- and an old one with some antique ideas of how tech will develop -- but it is not SIMPLE or simplistic. It's a rich, deep, commentary on today's hottest headlines, filled with exciting ideas.

Dumarest is the main character, the most vivid and fully drawn. He does acquire a "side-kick" in this episode, but that man doesn't go with him when he leaves the planet Toy.

Dumarest also finds, on most all the planets he visits, a woman of great interest and meaning to him personally -- but various things block or tear him away from that singular interest. This novel series is one of the main ingredients in launching me into a science fiction writing career -- so my Heros (over lifetimes) find and keep their S. O.

So Dumarest himself is the favorite character in all these novels.

Toyman opens with a classic BLAST of pure action -- plunging the reader directly into a bewildering scene. That was my favorite scene because it was so well crafted -- Allan Cole's STEN series (also on Audible) and most of Robert Heinlein's novels open this way. It's possible Dumarest of Terra was the series most responsible for the editorial demand that all science fiction open just like that -- in the middle of action, without explanation.

You may note how Robert Ludlum used this technique. It's easier to learn to do it from the E. C. Tubb titles than from Ludlum so I recommend Tubb as a writer to study.

Oh, the Aha! moments are strewn throughout the book, but I particularly liked Dumarest's explanation (near the end) for how he figured out what was really going on by assessing the essential character of his side-kick.

Insight into the Character of other people, the ability to discriminate between nuanced Character traits, to discern the values that another person is operating from, are traits usually portrayed only in the Detective in a novel series. Here we find Dumarest is the equal of Colombo when it comes to psych-ing out a hidden villain.

If you want to understand the present day, read this series -- and study who E. C. Tubb was. There's a lot more here than the surface marketing as genre fiction would lead you to assume. Learn to think like Dumarest and don't let appearances deceive you.