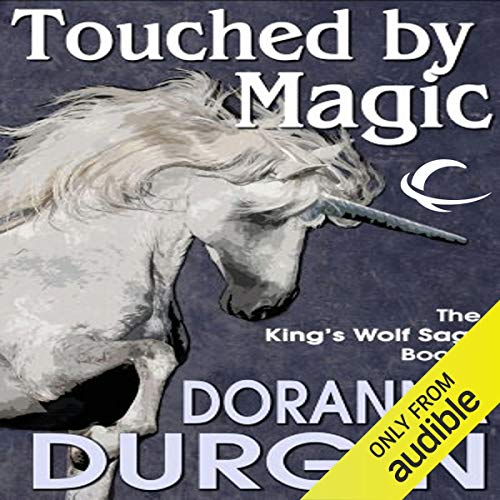 One man loses everything to magic - and will do anything to prevent it from taking over his world.

Magic has never been a part of Reandn’s life. Almost gone from Keland when he was born, there is no trace of it left by the time he patrols the Keep lands as an elite King’s Wolf.

Magic has never been a part of Reandn’s life. Until the people under his care start dying. Until the threat extends to his family - and then turns on him. Someone, somewhere, is trying to draw magic back into Keland, and they don’t care what - or who - is destroyed in the process. But Reandn does.

What listeners say about Touched by Magic

Children Vanish as Magic Returns to the Realm

This is the first of two books in a medieval fantasy involving wizards, magical unicorns, and the king's elite warriors (wolves). The author knows horses and includes numerous grooming and training scenes. I liked the characters well enough, but the plot felt too slow at times. I got restless. The plot involves children and adults vanishing, so I wanted to see the heroic wolf-leader Reandn (aka Dnny) make progress towards resolution faster.

Plus, the talented narrator read the audiobook fairly slowly, with pauses between sentences and more pauses within sentences, between the "he said" part of the sentence and the actual dialogue. Ferguson needs to pick up the tempo a bit. Otherwise, a solid audio performance.

This first book came to a satisfying conclusion, with no cliffhanger. I might try book two.

Ehh. Not the worst but definitely needs work.

Are you looking for a story that goes on and on and goes no where until the very end which is obviously a set up to do it again in book 2?Characters you can't root for one way or another? Absolutely no humor? Then look no further this is the book for you

Struggled at first and then couldn't put it down.

Struggled at first and then couldn't put it down. I think it may have been a combo of the beginning of the story being mixed abs my life getting hectic at that time as well. so check it out for yourself.

Excellently written & narrated! If you like a really good Fantasy this is it. And, if you're like me and also a horse person you'll really love it. I'm a gaited horse enthusiast, so was thrilled with Sky. I've already told my "barn friends" this is a Must Read! Can't wait to get the next in the series.