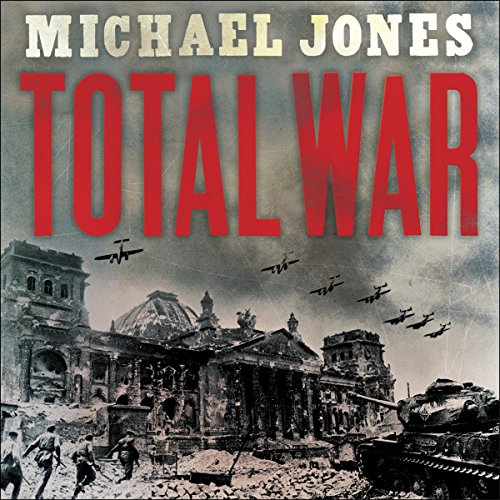 The powerful story of the Red Army's battle of liberation against the Nazi invader - from Stalingrad all the way to Berlin.

In February 1943, German forces surrendered to the Red Army at Stalingrad, and the tide of war turned. By May 1945 Soviet soldiers had stormed Berlin and brought down Hitler's regime.

Total War follows the fortunes of these fighters as they liberated Russia and the Ukraine from the Nazi invader and fought their way into the heart of the Reich. It reveals the horrors they experienced - the Holocaust, genocide and the mass murder of Soviet POWs - and shows the Red Army, brutalised by war, taking its terrible revenge on the German civilian population.

For the first time, Russian veterans are candid about the terrible atrocities their own army committed. But they also describe their struggle to raise themselves from the abyss of hatred. Their war against the Nazis - which in large part brought the Second World War in Europe to an end - is a tarnished but deeply moving story of sacrifice and redemption.

What listeners say about Total War

Apt title for the book. An emotionally heavy read.

This is a very meticulously researched book that goes some way in redressing the Western Hollywood / basic school curriculum view of WW2 history in Europe. Namely, Hitler is an evil guy who killed 6 million Jews and was only stopped by the Allied landings in France.

The horrors visited upon the Soviet populace and unspeakable Nazi cruelty is laid bare. Close to 75% of total German armed forces were serving on the Eastern Front. This is where the action was, not Western Europe. The Nazi campaign of extermination and terror, especially in Belorussia, was pretty harrowing to listen to. However, this pales compared to Soviet soldiers recounting fighting their way into Auschwitz and discovering living corpses. No wonder they drank so hard to escape the PTSD demons.

Excellent history, great narration, worth it

Among my library I have no less than 50 WWII books of all types and from all perspectives, however the Eastern Front (especially as told by the Red Army) are an unfortunately uncommon type of audiobook - this book does a fine job covering that. My only regret is that it is not longer.

I took little to no issue with the narration. Yeah, it might be a little cheesy when the narrator is speaking for a child or girl, but what can you expect? I found him to be great in all other respects, certainly NOT a deal killer for what a great story it has to tell. I fully intend on getting the other two Eastern Front audiobooks from Michael Jones as soon as I have the credits.

This book makes the Soviet communist soldier of ww2 look like some innocent troop. it is a boring slog from a side that was incompetent and lucky to survive the war

This is a fascinating book, perfect for audio. Many mornings I couldn’t get out of my car because I was enthralled by to story. Liberation of Auschwitz was particularly moving. If you have ANY interest in WW2 you MUST read this book.

Excellent eye witness account of what it was like to fight on the Eastern Front during WW2. Very detailed, excellent performance, and completely honest and up front experiences.

This book had only one problem and that was the volume. I turned it up as loud as possible and still had trouble hearing it. That needs to be fixed.

I wanted very much to listen to this book. Concerns an extremely important take on ww2. Unfortunately, narration is poor: narrator drops voice at end of sentences. Last few words just incomprehensible murmur.

This is a hugely impressive and beautifully presented piece of research. The excerpts from the diaries and letters of Russian soldiers present a very moving and harrowing account of the day to day realities of war. From my point of view, it was a welcome perspective from the western orientated accounts of the Second World War, with which I am familiar. Beautifully read, I was riveted from start to finish. Highly recommended

Harrowing and comprehensive survey of the Russian army's fight from Stalingrad to Berlin. presents the suffering of Red Army soldiers and moves the narrative away from the 'robotic fighting machine /vengeance seeking Asiatic hordes' or, currently unfashionable,' socialist liberators, ' to provide a well rounded and humane portrait of men facing indescribable horror.

A very different perspective of the stereotype Russian soilders we are used to. It shows the human face of the Russian soldiers with the letters home to their wives,parents etc.

The retreating Germans left a scorched earth policy with nothing left standing for the defeated civilians to survive the winter.

The Germans actually set up concentration camps of Russian civilians infected them with typhus and left them to be rescued by the advancing Russian soldiers hoping the Russian Army would become infected.

The liberation of The Auschwitz Concentration Camp is one of the most harrowing listening I have heard. It is hard to comprehend the sheer brutality that the German soldiers had towards there beaten foes, not stopping until the end of the war

A very well researched book which makes it possible to understand the revenge that the Russians unleashed on the German population.

Reap as you shall sow.

well written timeline of events interwoven with individual letters and memoirs. hits the balance of the Russian perspective without being too biased.

What a harrowing and incredible tour de force of a book this is. For anyone interested in Stalingrad and the defeat of the Nazis, this is one for you. Balanced, critical, engaging - sublime stuff from M. Jones!

The truth about the Soviet army in WW2

Very interesting to hear the other side of the story based on individual testimony.

A People Focused History of the War in the East

Excellent overview of WW2 from the Soviet perspective. Detailed enough to be informative but avoided the trap of a lengthy and turgid dive into minutiae that blights some military history. A very human narrative driven along by personal stories. Recommended.

Think you know about the war?

Fascinating to learn the Soviet viewpoint.

A real eye opener and explains so much about Soviet attitudes toward Germany and I think even policy toward the West later during the cold war and perhaps even how Russia sees the world today. A story of staggering suffering, bravery and humanity.