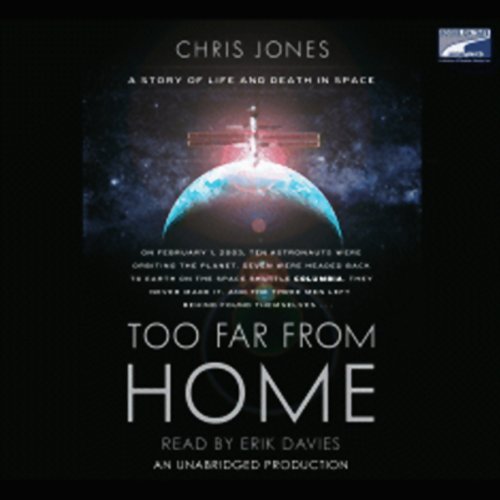 Too Far From Home

A Story of Life and Death in Space
By: Chris Jones
Narrated by: Erik Davies
Length: 10 hrs and 53 mins
Categories: Non-fiction, World Affairs
4.5 out of 5 stars 4.5 (2 ratings)

Too Far From Home

For a special breed of individual, the call of space is worth the risk it entails: men such as US astronauts Donald Pettit and Kenneth Bowersox, and Russian flight engineer Nikolai Budarin, who in November 2002 left on what was to be a routine 14-week mission maintaining the International Space Station.

But then, on February 1, 2003, the Columbia exploded beneath them. With the launch program suspended indefinitely, these astronauts had suddenly lost their ride home.

Too Far from Home chronicles the efforts of the beleaguered Mission Controls in Houston and Moscow as they work frantically against the clock to bring their men safely back to Earth.

Chris Jones writes beautifully of the majesty and mystique of space travel, while reminding us all how perilous it is to soar beyond the sky.

"[Jones'] story combines gripping narrative and strongly defined characters.... Jones' reporting is filled with details of life aboard the space station...That sort of frank talk enhances readers' identification with the astronauts, making their drama all the more engrossing." (Publishers Weekly)

What listeners say about Too Far From Home

This story was an excellent quick history of both the Russian and American space programs. The main theme of the story about the astronauts who were stranded on the International Space Station after the loss of the Columbia shuttle in 2003; I found fascinating.

The side tracks the author made on the history of the program gave a lot more insight into the differing mentalities of the American and Russians Astronauts.

The only detractor to this book, for me, was that I felt that the author got overly flowery in describing certain scenes, but that is not often.

I would recommend this book to anyone who wants a better idea of what it is like to be an astronaut.

Some of this book's tone may be described as overwrought - but in a good way. I just plain loved it. The stories, the descriptions and even all the adjectives took me back to the heady excitement and drama of the early days of the "space race," even with the steely-eyed, too-good-to-be-true astronauts. The book was diverting, thought-provoking (I loved the idea of the large and larger concepts of home), exciting and well narrated. If you remember Apollo and Mercury, you will like this book. And if you don't remember them, you need to read this book!

I thought this book was pretty good. The story was interesting at times, especially at the end. But I felt like it jumped around too much. I still liked it, though!

A peek into the mind of Don Pettit

I really appreciate the peek into the curious mind of Don Pettit. He's a national asset.

Author makes everything a metaphor.

While a potentially interesting story, Chris Jones murders every metaphor and cliche that exists in the English language in some vague attempt to make this story more touching and poetic.. After the first chapter it became overly annoying and distracting. It seems that Mr. Jones favorite line is 'as though' and I started to dread hearing it.

I'm honestly surprised he didn't try to equate taking a dump in space to 'a deep journey into the psyche of man'. Avoid this book if you are looking for a more factual story about Station life.

Like the JFK assassination, Challenger explosion and 9/11, space shuttle Columbia's tragic end is one of those "where were you when" events that was so shocking that it made an indelible mark on Americans' collective memory. While "Too Far From Home" retraces some aspects of our history in space, this historic story (whose details were new to me) in many ways starts upon the demise of space shuttle Columbia. Perhaps it was well known at the time but I hadn't realized the seriousness of the dilemma NASA faced when the space shuttle was grounded post-Columbia, stranding three astronauts (U.S. astronauts Donald Pettit and Kenneth Bowersox, and Russian flight engineer Nikolai Budarin) in space on the International Space Station (ISS) without a ride home. I found these three astronauts' story to be very suspenseful and compelling.

While some books about space travel are technical and explain every scientific nuance, "Too Far From Home" focuses on the human stories in the aftermath of Columbia. That focus on the human experience is what makes this audiobook so intensely compelling: The grief the three astronauts on ISS experienced upon learning about their colleagues on the Columbia, the challenges they overcame in rationing food, water and other resources while awaiting a ride home, the loss of control experienced by NASA officials when the best solution was to use an untested new Russian spacecraft to retrieve the stranded astronauts, and the very real risks these three astronauts faced during their journey home.

Between the true story authored by Chris Jones and Erik Davies' excellent narration, this was one of the most suspenseful audiobooks I've ever listened to... I highly recommend it to those interested in space history or human drama.

I found it difficult to take off my headphones

Chris Jones draws you into the current space program in ways that bring the events of Columbia's tragedy, current work aboard the ISS as well as the history of space exploration to life. Although some reviews have criticized his overly dramatic style, they forget that NASA teemed with Disney to make the Apollo program more accessible and exciting to people in the 1960s. I loved the artistic flair...it helped me 'see' and relate better to the events he unfolded.

Obviously, I enjoyed listening to this book immensely. More than just listening, I found that I would look up dates, events, people as the chapters went along to learn more about the details behind some of the stories presented. I don't think you even have to be that interested in the space program to find Too Far from Home captivating....but you will finish it wanting to know what happens next. I hope Chris Jones writes more! Erik Davies did a superb narration as well!

A look behind the scences

This is a good book for people interested in the details of what it might be like to be an astronaut or cosmonaut assigned to a long duration space station mission.

The book has an emotional, flowery tone that can be just a bit cloying, but the level of real detail and fascinating detail make up for that.

The audio book production quality is excellent, the narrator does a great job.

Recommended for readers interested in the American and Russian space programs.

A little confusing going back and forth but there is so much info so i understand..

I learnt a lot about the recent partnership between America and Russia and how the International Space Station came about. The most memorable part of the story for me was the detailed description of life on the Mir Space Station which was much scarier than I had imagined.

The book also shows the difference between the mentality of the Cosmonauts and Astronauts and between NASA and the Russian space agency. I have greater respect for both sides now.

Even though the prose was a bit long winded at times I'm definitely going to listen again.

Good but not what I expected

As usual I listen to the Audiobook and read the same book at the same time. The story behind the 3 stranded astronauts was good but I expected alot more tension, maybe it was just me expecting too much. Don't get me wrong I enjoyed listening to the narrator and the story was done at a decent pace. I'd recommend this to anyone who likes NASA, Russian Cosmonauts , Space Flight & the ISS. As Someone Else Has Stated : This is a reprint of the book Out Of Orbit. Be Aware.

Space - the inside story.

Well researched and written. Slightly dry delivery. Some edge-of-the-seat moments. Highlight for me was the Soyuz return. Recommended to listen in 1-2 hours blocks.

an excellent book full of drama and emotion.some over emphasis by narrator lost a star

A superb listen to a overlooked situation.

Get book, tells the story from everyone's point of view with details which could have never been discovered.

A wonderfully written account - extremely well read by the narrator.

So many interesting facts and lots of information about life on the ISS, astronauts, cosmonauts and the interactions between them, their families and their land-bound colleagues.

It 'reads' like a page-turner, but has moments of 'poetry' in its narrative as it seeks to illustrate the experience of being thrust into the vacuum of Space.

Too Far from Home

For anyone interested in space travel this is an excellent book and Erik Davies does a very good job in narrating it.
for me I couldn't put it down.

A fantastic account of life on the ISS and what happens when your return vehicle gets grounded. One of the best space exploration books i've read, gripping at times and even the daily mundane tasks are interesting. The ballistic descent had me on the edge of my chair.

An interesting insight into life in space

Would you consider the audio edition of Too Far From Home to be better than the print version?

Yes, far better. Try reading the book when you're driving.

Would you listen to another book narrated by Erik Davies?

'Not as good as The Right Stuff'.

It was a good middling book. Some good insights into life about the ISS and into the life of someone who belongs to a group / organisation I admire. There are no jaw-dropping revelations though. The book's interesting, rather than gripping.

If you could sum up Too Far From Home in three words, what would they be?

Fascinating full of information for the enthusiast

very good reading, very funny when he tries to imitate a Russian accent

the end was excellent

this book is very interesting if you like space exploration and would like to know about it's history.