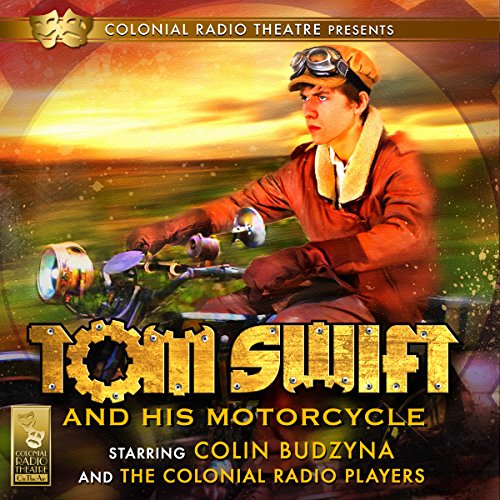 Tom Swift and His Motorcycle

Young Tom Swift purchases a motorcycle and, being the inventor that he is, modifies it to his specifications in time to transport his father's new invention (a revolutionary turbine motor design) to Albany. However, a group of investors plan to steal the design for themselves, and send a gang of thieves after Tom as he travels the backroads to Albany. Let your imagination take hold as you enter the theater of the mind with a full cast of actors, thousands of sound effects, and a thrilling original music score as the award-winning Colonial Radio Theatre on the Air presents Tom Swift and His Motorcycle.

Dramatized for Audio and Directed by Jerry Robbins

From the book by Victor Appleton

What listeners say about Tom Swift and His Motorcycle

A nice little adventure tale, very real, very relatable. I liked that he was good with his hands and had the ability to fix things other couldn't.

You could, it's not that long.

The full cast audio plays have more depth than having a book read. There are actors with distinct voices, sound effects, and music. Well worth the money.

this story kept me flying by the seat of my pants. Didn't know who to trust right along with the people.

I want more of the story it keeps me want more. love it a lot.