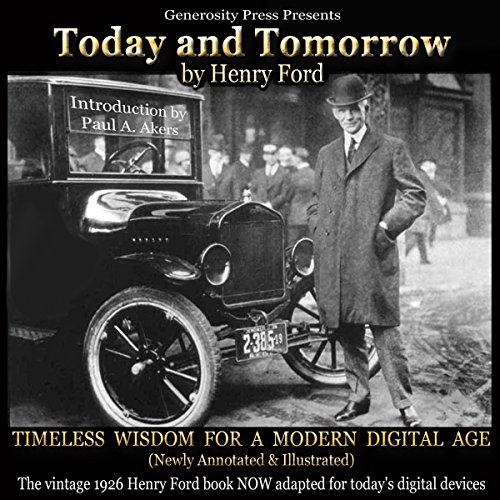 Henry Ford's impact on industry, business, and society continues to drive us to reach for seemingly impossible goals. He turned an automobile into an industry, transformed the world of farming with a tractor, and launched the airplane into a new era of mass production. Ford didn't just revolutionize transportation, he completely transformed the way we work, the way we create, and the way we live. He achieved the impossible equation of cutting the cost of his product in half yet improving its quality and reliability and even doubling the wages and standard of living for his people.

Ford also invested in the future by equipping people who had no perceivable future. That included educating and training orphans and at-risk youth at The Henry Ford School for Boys. This new version of Today and Tomorrow features an interview with 88-year-old Phil Morgan who was one of those boys, and one of the few people still alive who actually knew Henry Ford.

Today and Tomorrow is like Ford's assembly line, churning out great achievers and forming success after success for nearly a century. It's a timeless reminder that the work ethic and inspiration that still bring us success today can be multiplied and imprinted on the moldable steel of our innovators of tomorrow.

Now you can finally enjoy this newly annotated version of the vintage 1926 Henry Ford classic adapted for today's digital devices. Introduced by author, businessman, and internationally recognized expert on lean manufacturing, Paul A. Akers, Today and Tomorrow by Henry Ford is timeless wisdom in a modern digital age.

Available in print and digitally as well.

What listeners say about Today and Tomorrow

This book is dull. There's no story here, just a list of things done at Ford Motor Company to improve profit. It reads like a list of bullet points. I stopped listening a third of the way through. I guess I was looking more for a story of the company. If you're looking for a list of ideas on how to implement improvements in manufacturing this maybe interesting.

The reader's performance is great and probably kept me interested longer than I would have been reading this myself.

If you are into lean, he's the originator. These are the concepts that built the machine that changed the world.

Practical ideas from a visionary thinker.

I couldn’t stop listening to this book, the narration was fantastic. The practical ideas that are in this book are you still relevant today.