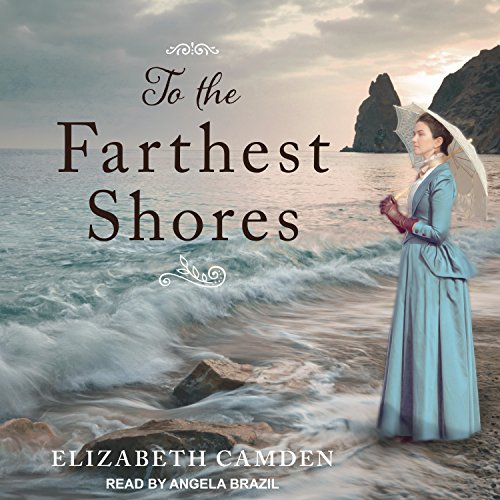 To the Farthest Shores

It has been six years since army nurse Jenny Bennett's heart was broken by a dashing naval officer. Now Lieutenant Ryan Gallagher has abruptly reappeared in her life at the Presidio army base, but refuses to discuss the inexplicable behavior that destroyed their happiness.

Ryan is in an impossible situation. One of the few men in the world qualified to carry out a daring assignment, he accepted a government mission overseas that caused his reputation to be destroyed and broke the heart of the only woman he ever loved. Honor-bound never to reveal where he had been during those six years, he can't tell Jenny the truth or it will endanger an ongoing mission and put thousands of lives at risk.

Although Ryan thinks he may have finally found a solution, he can't pull it off on his own. Loyalty to her country compels Jenny to help, but she never could have imagined the intrigue she and Ryan will have to face or the lengths to which they will have to go to succeed.

"Camden is the master of historical-inspirational romance, and she has delivered another fascinating read with complex, memorable characters and an interesting subplot about the start of the cultured pearl industry." ( Booklist)

What listeners say about To the Farthest Shores

I love Elizabeth Camden. She is so talented. I really hope she doesn't leave out God in her books now that she is a best-selling author! The problem I had with this book is that I still don't know why Ryan did what he did?! Poor Jenny! But what courage and grace she showed Ryan to forgive him. Only a Spirit-filled person could be so much like God, I believe. Great performance!

Narration almost killed the book for me

The story is not her best but it’s ok but the narration was bad enough almost didn’t finish it several times. There were times she wasn’t as bad as others but the last of it was almost unbearable for me. Some are just not the best in this field and not to be mean it’s just not her calling.

Story was good, but the narrator doesn't sound human. It was harder finish this book.

The story was good. However, the reader sounded a lot like Siri, very clipped and halting in her speech. I don't know if it was a problem with my download, but it was annoying to listen to.

The story was pretty good. I do not think it entirely truth-worthy when the author dismisses the need for others to show themselves trustworthy as a woman's silly insecurity. I struggled with the narrator's clipped speech throughout the book which made it sound a little like she was scolding someone or giving a lecture. And she can't do a child's voice. It's only bothersome, not terrible.

First of all I don’t understand why the other reviewer‘s knocked the narrator. she was great, I could hear her just fine she wasn’t over wild. there was no cuss words and it was a great! A story without cuss words which was wonderful! but there was nothing wrong with her. she wasn’t choppy or anything I loved the story and I love the way it ended I just don’t know why everybody condemned the narrator she was fine in fact I don’t know why but people love Britney Presley and to me I don’t like her at all, she’s too fast and quick and I don’t like her reading style.

Great story with excellent takeaways. The writing is fantastic, the way the reader emphasized odd words in the sentence was bothersome.

Great story but difficult to relax to listen to.

A differerant narrator would create an enjoyable experience.

I enjoyed the storyline of this book, though at times I wished it would just get to the end. That was due in most part to the narrator. She was too clipped in her speaking and often sounded robotic. There was little feeling presented within the story. I wish it had been read with a softer tone and not the clipped words she often used.

I love the varied topics Elizabeth Camden writes about! They are well thought out and I find myself learning about things I’ve never thought much about while reading a great story. This story wasn’t as good as some, and again lacked the witty humor of the first books of hers I read, but it was the narrator that bothered me most. And maybe that’s where the brightness and humor got wiped out. This narrator seems to focus so much on being perfectly concise/articulate that she lacks a cheerful upbeat smooth narration. To me the main character sounded like a not so kindly, demanding person with the voice the narrator gave her. She’d be excellent if she’d smooth out a little and inject some enthusiasm!

It took me a while to complete this story because, in the beginning, I would fall asleep while listening to this narrator.
Her voice is a mix of robotic and then, at times, somewhat enjoyable. The usual inflections were missing some of the time, but showed up as expected at other times. I think this could have been a very enjoyable book if another narrator had read it.