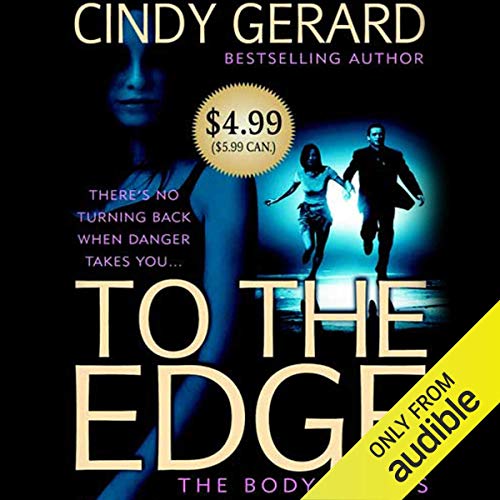 The daughter of a wealthy businessman, Jillian Kincaid grew up with bodyguards shadowing her every move - and she hated it. Now a TV anchorwoman, she refuses to let another hired thug follow her around. Not even when she begins to receive terrifying death threats. Not even when the bodyguard is the darkly seductive Nolan Garrett.

Trained in Special Ops, bodyguard Nolan Garrett has been hired by Jillian's father to keep her out of danger. But it's clear from the start that Jillian isn't going to make his job easy. Far from the spoiled princess he expected, Jillian is tough, independent, and totally sexy. And she's fighting him every step of the way.

As Jillian's stalker raises the stakes, Nolan must keep her close if he wants to keep her alive. But being so close can only turn up the heat that's been simmering between them - a heat that could explode into passion at any moment.

What listeners say about To the Edge

While the suspense part of the plot was well written, I just didn't like poor little rich girl Jillian. Why would an educated professional woman refuse protection after receiving death threats? It made absolutely no sense, considering that money was not an issue.

To the Edge, which I read more than 10 years ago, introduced Nolan and his brothers & sister who owned a private security company. I liked Nolan's commitment to protecting Jillian without becoming a dominant alpha jerk. His sister Eve (ex-FBI) seemed like an interesting character, so I will definitely listen to her book.

Loved it.. Started a bit slow but turned out great. Hope to hear from the couple

I tried to finish this offering, but could not. It is full of foreplay and sexual innuendos, but lacks a story line that would keep my interest or attention. I got half way through and was through. If there was a plot, none was evident.

Thoroughly enjoyed this. Definitely worth a listen. Looking forward to listening to more in this series.

well written and narrated. Nice book to read it has you on the edge of your seat trying to figure who the murder suspect really was..

I really loved it!

The story is interesting and the performance is great as well. Really liked it. :)

I thought the storyline would be cliche. but it wasn't. An excellent who done it. Right to very end. The love story was real and enduring.

I have never read or listened to this author's books. I read the rave reviews and I was sadly disappointed in the end. I listened to 2.5 hours of it and was still waiting for real excitement. The narrator was good and not his fault the story doesn't grab one's attention right from the start.

If you enjoy listening to books that do not need your full attention then this book is for you. If you prefer books that you literally cannot put down then I would suggest looking elsewhere,

As much as I loved the story I was a little confused with how it ended. But over all I loved the plot the romance and I’m looking forward to the next book in this series

Too much inner dialogue

What was most disappointing about Cindy Gerard’s story?

Great potential, BUT I don't like it when the story is mostly told in the main characters head instead of by actions.

Have you listened to any of Alastair Haynesbirdge’s other performances before? How does this one compare?