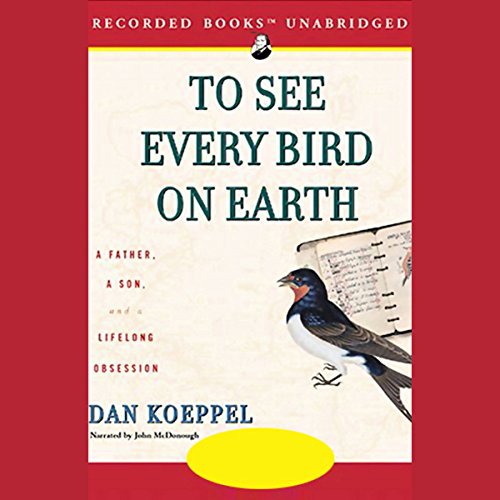 To See Every Bird on Earth

From well-known nature and adventure writer Dan Koeppel, whose work has appeared in Audubon and National Geographic Adventure, comes this true story of one bird watcher's incredible achievements.

When the author's father Richard was 11 years old, he spotted a Brown Thrasher, and his fascination with birds began. Now a "Big Lister", Richard is one of only 10 or so people to have recorded more than 7,000 species in his notebook. This is the remarkable chronicle of his travels across the globe in pursuit of his fixation. It is also a thoughtful examination of the natural world and a touching father/son story.

To See Every Bird gets to the very core of a pastime that is a hobby for millions, and nothing less than an obsession for some.

What listeners say about To See Every Bird on Earth

One of my all time favourites

This is a fascinating biography of Richard Koeppel, written by his son. Brilliantly read by John McDonough (who, far from being ancient, would have been about 51 at the time of recording...a few years older than the author, but sons come in all ages Caroline ;-)).

A story of the frustrations and contradictory influences shaping an unorthodox life, It is also a vivid insight into the relationship between a son and a father. With Richard struggling to be comfortable with his own place in the World, it was not easy for the young Dan to be close to his father.

For me as a (much less committed) birder the meat of the story lies in the birding aspect of the story of 's life story. As such I can identify directly with Richard's frustrations and recognise his remarkable achievement.

The story would still be a great read whatever Richard's obsession had been. Even if birds and birding leave you totally cold it's worth thinking about.

I've listened to this many times, and find more in it every time I hear it.

Would you listen to To See Every Bird on Earth again? Why?

The performer was very good. He made the story more interesting.

The son's quest to get to know his father.

Which character – as performed by John McDonough – was your favorite?

The son as narrator.

Impossible, too long. I enjoyed the book in 1.5 hour segments with my blue tooth headset during my morning 4 mile walks.

I learned a great deal about birding and in particular, the world of the big listers.
I recommend it.

Interesting memoir but a totally disconcerting narration. The author is writing about his relationship with his elderly father, but it sounds like it's being read by the author's father since the narrator is Brimleyish. This got incredibly annoying over the course of the book. Still worth getting if you're interested in big listers. Ironically, he has a part about the folly of people who claimed they saw the ivory-billed woodpecker in the 90s-- written before the ibw was rediscovered.

a great read and a stunning exploration of one's passion for birds and the art of birding.

To See Every Bird on Earth

I think anyone who has been fortunate enough to go birdwatching away from their home country will understand the urge to see more and more birds! The author dwells in his fathers upbringing which at the time I felt was in too much detail but now realise the significance and importance of getting it into the text, sort of answering the question what goes through the mind of an avid collector of lists! You can tell Dan Koeppel has a writing background and is narrated very well by John! The mention of top world birders and just what they get up to is also somewhat gripping. I throughly enjoyed this book leaving me with the urge to relive my life as a world lister and having done a few trips abroad I can only imagine how much fun, stress and immense pleasure that would bring to list on a world scale and yet realise that it would not fit in well with a stable relationship or a 9-5 working week!