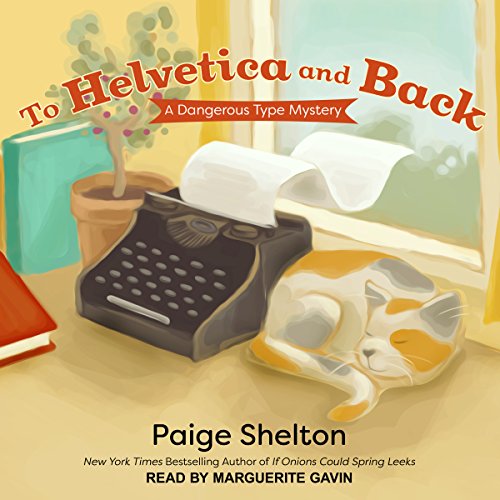 To Helvetica and Back

Star City is known for its slopes and its powder. But nestled in the valley of this ski resort town is a side street full of shops that specialize in the simple charms of earlier eras. One of those shops is the Rescued Word, where Chester Henry and his adult granddaughter Clare lovingly repair old typewriters and restore old books. Who ever thought their quaint store would hold the key to some modern-day trouble?

When a stranger to town demands they turn over an antique Underwood typewriter they're repairing for a customer, Clare fears she may need to be rescued. A call to the police scares the man off, but later Clare finds his dead body in the back alley. What about a dusty old typewriter could possibly be worth killing for?

What listeners say about To Helvetica and Back

A little slow to start but well worth persevering. A cast of very diverse characters, an interesting little town and a unique plot. A really good story.

If you enjoy cosy mysteries, this one was mostly low-key, not overly exciting, yet had a very interesting angle for creating the characters. It featured a grandfather (Chester) and grand daughter (Clare) who together run a shop that repairs old typewriters and books called The Rescued Word. I don’t know this for sure, but I’m guessing that many of us who read cosy mysteries may well recall typing on actual typewriters (well, I do). So at least for me, that certainly made the book more fun.

Who would ever think someone might get killed after trying desperately to buy or steal an old typewriter? Well, that is the dilemma in this book. As Clare has to work with her best friend Jodi and her brother Creighton (whom she formerly dated) who are both part of the Sky City, Utah police force, to solve this odd mystery, she faces danger, and finds love.

I think the strength of this book was in creation of interesting characters. The weakness might have been the narration, which was okay, but felt a little lackluster. I wouldn’t call this a page-turner, but it was a good solid listen. Recommend.

This is a new author to me. As the characters develop, the writer makes quick work of focusing on the main people and shops. The story is smooth and engaging from the start. The narrator sets just the right tone. Great read!

A Mystery in a Delightful Setting

In To Helvetica and Back by Paige Shelton, Clare works at the Rescued Word, the special shop where she works with her grandfather, Chester Henry, repairing ancient typewriters and books. Chester even has built a working replica of the Gutenberg Press that earned him national attention in the 1960s. Then one day Mirabel, a regular customer and contemporary of Chester's who used to write then-scandalous romance novels, brought her old Underwood typewriter to be repaired. But before Clare can begin work on the typewriter, a scary looking man in leather and with bloodshot eyes comes in and demands that Clare sell that particular typewriter to him. As the man becomes violently agitated, Clare sends for the police, causing the man to escape. But the next morning, when Chester comes downstairs, he finds Clare asleep at her desk after she has worked on a significant book project. They find the security camera has gotten turned off, and when turning it back on, the grandfather and granddaughter pair spot spot a pair of boots. Going to the back alley, they find the man in leather murdered.

With Jodie, her best friend who is a cop, Clare looks into the case, especially after she has no alibi for the murder. But she also meets Seth, a geologist who has just moved to the area, and discovers a spark between them, a spark she hasn't known in years.

I really enjoyed the setting of this book! I loved the details of learning about typewriters. I'm old enough to have watched my mother do all her typing on the newest models, but I never had experience actually using one beyond the occasional times I sneaked into the study and played with my mom's typewriter. So as a child of the computer age, I really found these details fascinating! But I also really loved the aspects of restoring books. We get to see Clare as she creates a missing page from an old and sentimental but not valuable edition of Tom Sawyer, which is how she meets Seth, who owns the book.

The mystery plot had fewer twists and turns than a lot of good mystery books. I found it interesting but not gripping. And I did not find the conclusion very satisfying, especially since it did not give us a very good opportunity to guess the solution.

Besides the fantastic setting of the book, the other redeeming feature of To Helvetica and Back is the descriptive characters found in Clare and her grandfather Chester, as well as others in the book like Seth and Jodie. But one detail that seems strange to me is the fact that while we see Clare and her brother as well as her grandfather, known to even his grandchildren and great- grandchildren as Chester, there is no mention of Clare's parents.

I found the title curious, having no clue what Helvetica was or what it had to do with the book. Looking up the term on Wikipedia, I learned that Helvetica is the name of the typeface, or font, that was one of the most popular in typewriters in the 20th century. Now that I understand the play on words that comes with this term, I find the title fun, but I doubt most readers will get the pun or know any better than I did what Helvetica is. If only the book had included an explanation of the word, it would have made the title fun for everyone.

I discovered this delightful audiobook because I was perusing the books performed by Marguerite Gavin, whom I really appreciate, and hoped to find something else to listen to by her. And I was very pleased by this performance by Gavin, who adds to the liveliness of the book.

Despite the weak mystery plot, I had a good time listening to this book. The setting and atmosphere were delightful and the characters fun. I see this as a promising start to a new series with potential. I give the book four stars.

I enjoyed listening to this cozy mystery. Maguerite Gaven us one of my favorite nsrrators. She does a great job bringing these characters to life. The story is well written with engaging characters who behave realistically. I hope the rest of the books are made available to Audible listeners.

I love Paige Shelton. The problem I had with this story might seem trivial but it really bothers me nonetheless. The cat is a male calico. Male calicoes are so rare as to almost be nonexistent.

I've totally enjoyed this first book in the series and immediately got the other two. Love all the characters and hope for more books.

does anyone else hear a clacking sound in the background? I'm guessing it's supposed to be a typewriter, but the noise is very distracting. it's a 'meh' book. won't recommend it, re-read/listen, nor pick up any of the author's other books.

What a waste of time. It was a pleasant and interesting story with an unsatisfying, abrupt ending. I’m sorry I wasted my credit and my time.

Not what I was hoping for...

Was hoping for more Agatha Christie style but got more of a generic cop show.