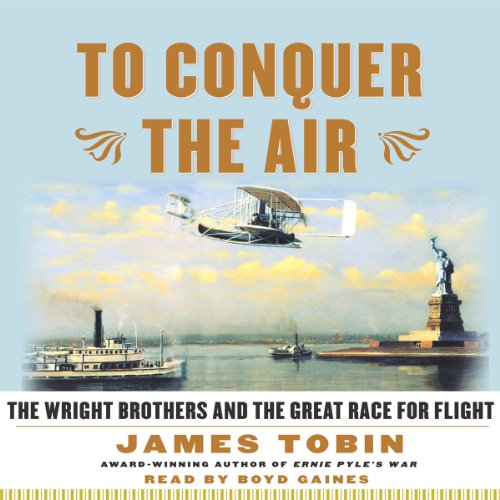 To Conquer the Air

"For some years I have been afflicted with the belief that flight is possible to man. My disease has increased in severity and I feel that it will soon cost me an increased amount of money if not my life."

So wrote a quiet young Ohioan in 1900, one in an ancient line of men who had wanted to fly - wanted it passionately, fecklessly, hopelessly. But now, at the turn of the 20th century, Wilbur Wright and a scattered handful of other adventurers conceived a conviction that the dream lay at last within reach, and in a headlong race across 10 years and two continents, they competed to conquer the air. James Tobin, winner of the National Book Critics Circle Award in biography, has at last given this inspiring story its definitive telling.

For years Wright and his younger brother, Orville, experimented in utter obscurity. Meanwhile, the world watched as the imperious Samuel Langley, armed with a rich contract from the U.S. War Department and all the resources of the Smithsonian Institution, sought to create the first manned flying machine. But while Langley became obsessed with flight as a problem of power, the Wrights grappled with it as a problem of balance. Thus their machines took two very different paths - his toward oblivion, theirs toward the heavens.

To Conquer the Air is a hero's tale of overcoming obstacles within and without that plumbs the depths of creativity and character. With a historian's accuracy and a novelist's eye, Tobin has captured the interplay of remarkable personalities at an extraordinary moment in our history. In the centennial year of human flight, To Conquer the Air is itself a heroic achievement.

What listeners say about To Conquer the Air

To Conquer the Air: The Wright Brothers and the Great Race for Flight, is an insightful, well-researched narrative of the development of heavier-than-air flight by James Towbin. This novel is essentially the story of the Wright brothers and their competition, told in chronological order with scenes switching back and forth between the Wrights and other aviation pioneers to show the tension of the competition in the race to fly. The irony involved creates a surprising amount of suspense for what is essentially a historical novel. Wilbur Wright?s use of the scientific method to develop models and prototypes is impressive. This began with aerodynamic design and control of gliders with the brothers concentrating on flight control and design, while others were more concerned with design and power. Especially insightful was their development of a primitive wind tunnel that they used to test and modify their designs. The family story is included to add to realism to the description of what these pioneers were experiencing at a time when they were making history. The narrator, Boyd Gaines, does a fine job reading the abridged version of the book, adroitly capturing the foreign and regional accents. I was so thoroughly taken with the story that I never lost interest during the six hours and ten minutes duration of the program. This four-star novel lets one sit back, relax, and experience an important time in American history.

A cunning and accurate account on the events and life of the early years of flight. This book encompasses the factors of the how the first flights came to be, in a clear easy to listen story. In addition to the straight facts, the author also includes external influences such as friendships, family and fate that adds marvelous insight!

The speaker has clear tone, the audio quality is excellent and the writing style makes it difficult to stop. While the history of flight does stretch into modern times, this is only the primal years, during the infancy and the quest for fame.