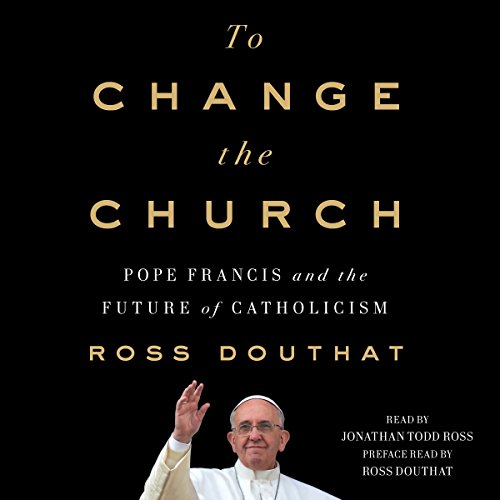 To Change the Church

A New York Times columnist and one of America's leading conservative thinkers considers Pope Francis' efforts to change the church he governs.

Born Jorge Mario Bergoglio in 1936, today Pope Francis is the 266th pope of the Roman Catholic Church. Pope Francis' stewardship of the church, while perceived as a revelation by many, has provoked division throughout the world. "If a conclave were to be held today", one Roman source told The New Yorker, "Francis would be lucky to get 10 votes."

In To Change the Church, Douthat explains why the particular debate Francis has opened - over communion for the divorced and the remarried - is so dangerous: how it cuts to the heart of the larger argument over how Christianity should respond to the sexual revolution and modernity itself, how it promises or threatens to separate the church from its own deep past, and how it divides Catholicism along geographical and cultural lines. Douthat argues that the Francis era is a crucial experiment for all of Western civilization, which is facing resurgent external enemies (from ISIS to Putin) even as it struggles with its own internal divisions, its decadence, and self-doubt. Whether Francis or his critics are right won't just determine whether he ends up as a hero or a tragic figure for Catholics. It will determine whether he's a hero or a gambler who's betraying both his church and his civilization into the hands of its enemies.

What listeners say about To Change the Church

Not being a Catholic, I found this book helpful and also it gave me much more sympathy for Catholics in general. I didnt even know there was such a thing as a conservative catholic (only have come in contact with vertly liberal Catholics) and it has given me more nuance to understanding the dynamics at play in the Catholic church. I feel like I learned a lot through this book!

The publisher owes an author of Douthat’s reputation and vocabulary a narration to match—I rarely write a review of this kind, but given the specialized subject matter, it would have been far preferable to have the author read the text himself.

A Conservative's View of the modern Church

Although I fundamentally disagree with Douthat's analysis (and conclusions), I found this to be a fascinating account of the state of affairs in the Catholic Church over the past 55 years---especially his "insider's" perspective on some of the main players. Despite his numerous swipes at Traditionalists (of which I am one), I could not stop listening. And despite the blistering attacks levelled at Douthat by Catholic conservatives, I found his conclusions to be relatively optimistic. My major disagreement with him lies in the contrasts he draws between JPII, Benedict, and Francis. The differences are style---not substance, as I am convinced that the root cause of most of the current problems in the Church is Vatican II. Despite Francis' outlandish and frequently heretical pronouncements, his pontificate is the direct outgrowth of (and totally consistent with) Vatican II.

Although I frequently nit pik narrators who are guilty of errors in pronunciation, none have even come close to the egregious number contained in this recording. I an surprised that a journalist from the New York Times would not have done a better job of screening the narrator of such an important work. It was truly painful to hear him mutilate so many commonplace words---by far the worst I have heard in the hundreds of books to which I've listened.

Douthat's thoughts on the Church of 2018 are original and important. Unfortunately a narrator who is completely unfamiliar with ecclesiastical language was chosen. I lost count of the misspronouced words. It's was distracting and infuriating.

Very well narrated but mispronounced many foreign language words.
Should check how things are pronounced in Italian, Latin etc...

Aspiring writers should heed this lesson in the perils of writing opinions for a living. This book imparts almost no information apart from rumor and no understanding apart from its author’s. If you happen to be interested in Douthat’s understanding of Catholic theology, though, this book is for you.

I gave the book two stars only so that I could give the narrator just one. I don’t think he’s ever read much Catholic writing.

It was frustrating to listen to a narrator who does not know the distinction between pronunciations of the word “the“. When the word “the” appears before another word that begins with a vowel the pronunciation is “THEE”. The narrator would pronounce it that way in front of words that begin with consonants. You can imagine how frustrating it is to hear “the car“ pronounced “thee car“.

Get this man some training!

This book captures the issues at stake in Pope Francis' actions and writings. some mispronounced words but otherwise well read

Ross Douthat’s analysis of the papacy under Pope Francis is extremely well balanced and informative. He exhibits a good grasp of Church history. The book is honest, insightful and well written. I thoroughly enjoyed it!

Glad I have never found myself trapped in church "stuff". Nothing to do with sprituality.