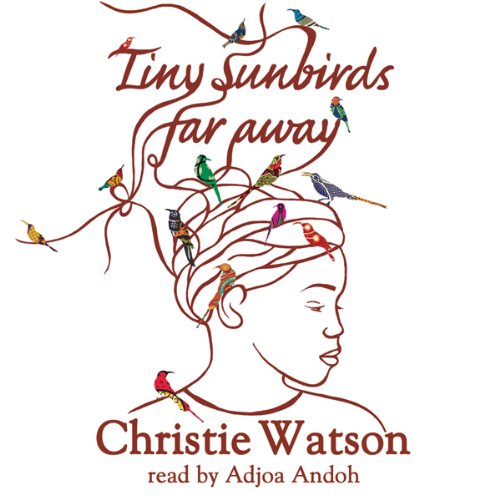 'Everything changed after Mama found Father lying on top of another woman.'

Blessing and her brother Ezikiel adore their larger-than-life father, their glamorous mother and their comfortable life in Lagos. But all that changes when their father leaves them for another woman. Their mother is fired from her job at the Royal Imperial Hotel - only married women can work there - and soon they have to quit their air-conditioned apartment to go and live with their grandparents in a compound in the Niger Delta.

Adapting to life with a poor countryside family is a shock beyond measure after their privileged upbringing in Lagos. Told in Blessing's own beguiling voice, Tiny Sunbirds Far Away shows how some families can survive almost anything. At times hilarious, always poignant, occasionally tragic, it is peopled with characters you will never forget.

"This is not a bleak book: there is humour and love, especially in the growing relationship between Blessing and her grandmother, a traditional midwife. Absorbing and passionate." (The Guardian)

What listeners say about Tiny Sunbirds Far Away

Listening to "Tiny Sunbirds Far Away" defied sleep especially in The Time of Covid19. Christie Watson explores emotions in a way that draws you in, even in the most difficult of life's conditions. Her exploration of love, abandonment and family in a modern yet very traditional Nigeria is able to carry the listener through the story. Humor, mirth, love, bringing understanding and sympathy.

I came across this book by chance, after following a link to see what others who had also purchased a book I was then reading had also read. I have to say that I am so glad that I did. The story is told from the view point of 12 year old Blessing who lives a comfortable life with her mother, father and older brother in an upmarket compound in Lagos. When her father ups and leaves for another woman the family is forced to move in with Blessings eldery grandparents, who live in a village in the Niger Delta, with no running water, no electricity and the ever present threat of political uprising just a not-so-distant gunshot away. As well as dealing with the lack of modern day comforts, Blessing is also introduced to a world of religion and age-old customs that she finds both comforting and shocking respectively. All the characters are wondeful, with so much depth assigned to each of them that it is impossible not to love them all and by turns both laugh and cry with them as the author unfolds their story.
The narrator is amazing. She acts each character so perfectly and her diction is clear and delightful to listen to. I could easily tell which character was speaking at any one time from the voices that she gives them. It is so nice to listen to a book which is properly acted by the narrator, (another example of which would be the fantastic The Help), instead of just read out loud.
All round I would highly recommend this book, it is uplifting, funny, sad, informative, scary and heartwarming.

This story set in Nigeria is so readable and listening to it read by Adjoa Andoh was so lovely and the imagery and feeling it produced was very real. I enjoyed the characters of Blessing and her Grandmother and Celestine especially. Blessings mother although present throughout the novel always seemed to be on the fringes of her life and maybe had difficulty showing and or responding to emotions. The political climate and time of the novel made it difficult to exist and the life of Ezikiel was very difficult as a result. The fact that the story was told through the eyes of Blessing made it more enjoyable.
The role of Grandmother as the local midwife and what that entailed was very interesting to me as a midwife and I really enjoyed these sections of the story.
Life was hard for women and the domestic violence elements of the story Celestine endured were not pleasant especially when they were considered necessary by other female members of the family.
The narration was fantastic and totally made the story I so so enjoyed this book and would highly recommend it.

This book revealed an unknown (to me) culture of the Niger Delta and the impact upon it of the oil industry - through the medium of a family saga which had resonances for the whole world. It had messages for mothers, daughters, brothers, fathers, grand-parents and step-parents. Beautifully, and at times amusingly, read by Adjoa Andoh.

A beautifully written and narrated book

I was enchanted by this book. One of the best I have read / listened to in several years. The characters are extremely well crafted and the plot is full of surprises. I can't wait for Christie Watson to bring out another, perhaps a sequel. Adjoa Andoh's narration was superb, bringing the characters to life. This book made me feel that the Niger Delta is the first place and the last place on earth that I should want to visit.

A story that makes lasting impression...

Charming and Beautifully told by an amazing narrator. I brought this as part of the " buy two and get one free" offer and im so glad I found it and didn't over look it. Its a story I will always remember.

What did you like most about Tiny Sunbirds Far Away?

The narrator! She was absolutely sublime. Every character had a different voice, but they were all perfect. The story itself was funny, sad, heartbreaking, inspiring.

What other book might you compare Tiny Sunbirds Far Away to, and why?

I honestly couldn't, it's not comparable to anything.

EVERYTHING! She was absolutely amazing. Every voice, the accents, her vocal inflection - she was simply wonderful.

An insight into modern Nigeria

I bought this book as part of an audible offer, and am very glad I did. It is well written and beautifully read by Adjoa Andoh. As other reviewers have noted, it covers many of the issues affecting Nigeria, (and many other places), including Western exploitation, armed rebellion, religious conflict, domestic violence and FGM. This breadth of scope is my main criticism - it does sometimes feel as though the author was trying to cover every issue, and the plot is therefore sometimes contrived. Also note - it is not for the squeamish! But overall, well worth the listen. NB For more on West Africa (in a slightly different area and time) I would highly recommend Half of a Yellow Sun, with the same narrator.

One of the top 3 books ever listened to on Audible...

I absolutely adored listening to this book. This is one of those listens that you never want to end, and I found myself rationing chapters towards the end to make it last longer.
The book is so well written and the words just talk to me in a particular way, I've lived in Africa, Ghana particularly, and the cadence and rhythm of the dialogue and descriptions are fascinating and reminded me strongly of that time. The fact that this is the authors first published novel to me is absolutely outstanding.
Blessing of course being the main character is wonderfully depicted ibut it is the Grandmother, that for me is the stand-out character. Wise, loving yet sometimes faced with very difficult cultural decisions, she is a complex character and comes alive through absolutely fantastic narration by...
The subject of the Nigerian Delta, the conflict between the greed of the oil companies and the local people and the harrowing subject of FGM, or cutting ,as well as the beautiful but unflinching descriptions of birth and labour make this book an essential read I feel.
Even if you have never set foot on the African continent, you will still fall in love with this book.
This is the first review I've left on Audible, and I've listened to many books, as I was so moved by this particular novel. I urge you to listen to it, however it is so well written that even reaching in the usual way but still be an amazing experience.

Yes, I would recommend this audiobook to a friend as it was a compelling multi-layered story with richly drawn characters and a strong sense of place. I also liked the narration and the accents.

The way that some very important issues were woven into the context of the story.

I would not recommend this as a book to listen to before sleep or while driving as there were some harrowing scenes where I felt myself quite distressed. I would still urge people to give it a listen though, as it was good story and well read.

This book will stay with me for ever.

What made the experience of listening to Tiny Sunbirds Far Away the most enjoyable?

The narrator. As if she was telling her own story.

The subtle humour and the frankness of the families ordeal.

I found myself praying for good things to happen to Blessing and her family as the story progressed and I felt like I was experiencing her situation alongside her. Fabulous narration.

Just listen to/read it you won't regret it.