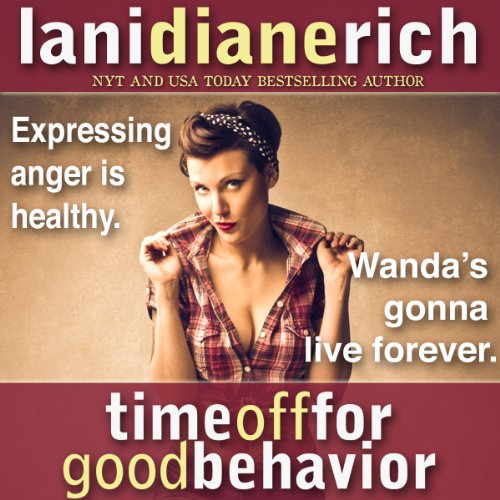 Time off for Good Behavior

For Wanda Lane, life has been one long string of screw-ups. Her abusive ex-husband keeps threatening to kill her, she just lost her crappy job, and a head injury (sustained while diving off the witness stand to attack an obnoxious attorney) has left her hearing phantom music no one else can hear. It isn't until she hits the rock bottom of her bottle of scotch that she begins to wonder if maybe - just maybe - the problem is her.

On her pothole-ridden path to becoming a decent human being, she makes friends with Elizabeth, a single mother looking for her own solid ground; Father Gregory, the patient priest who counsels Wanda, even though she's not technically Catholic; and Walter, a Jimmy-Stewart-ish lawyer who is smart, sexy and single...and so far out of Wanda's league that she thinks he must have been sent from God as one last punishment for her past transgressions. Can an angry, lost woman find her way back from failure, or are second chances the stuff of myth?

You may want to move out of her way.

What listeners say about Time off for Good Behavior

If you are thinking about this book,

I urge you to get the audiobook - not the physical book.

I believe some of the 3 star reviews by others would have been higher if they listened to the audiobook instead of reading the paperback or ebook. The audiobook narrator Hillary Hawkins is a COMIC GENIUS!!!!! Hillary emphasized different words and interpreted things differently than I would. If I were reading the book I might say a line one way which would make the heroine unlikeable, but the narrator read it in a way that made me laugh.

Bottom line: I laughed many times!!!!

It also had one of my favorite tropes: Main character on a journey of changing herself.

There is a lot of swearing. But it’s not like some books where a guy says the f-word in every other sentence as his regular way of talking. Wanda swears in response to things like when she is angry or insulting someone. I’m not a fan of swearing but I’m usually ok reading it. So, you need to be open to it.

THE STORY
is about a smart competent woman who made stupid choices, including marrying a loser abusive husband. (She had a reason and I could kind of buy it.) She is divorced, meets a great guy, but delays a relationship until she can get her life fixed. There is a nice romantic ending, but most of the story is about Wanda and various people in her life.