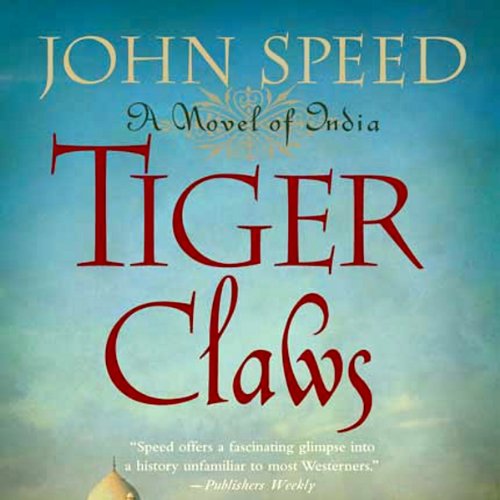 India, 1658. History blazes in Tiger Claws as passion and desire ignite India's Muslim-Hindu conflict. The adventure that began with The Temple Dancer now continues as Maya, the temple dancer, traveling by caravan to her new owner, is kidnapped by the bandit prince Shivaji, and their destinies unite. Meanwhile, in the jeweled palace of Agra, Aurangzeb - a fanatic warrior-prince with an insatiable lust for power - conspires with the Eunuch Brotherhood to overthrow his own father, the dissolute Mogul Emperor.

Shivaji re-forges Maya's broken sword, sparking a rebellion that will rage across India and shatter the Mogul Empire. To this day, the names Shivaji and Aurangzeb inspire fierce love and fiercer hatred. Only the vast canvas of an epic novel can truly embody them. In Tiger Claws, a master storyteller breathes new life into their history - a conflict that shaped the face of India, and our world today.

With thrilling, sensual prose, John Speed weaves a rich tapestry of intertwining stories - of commoner and king, of women and the men they love, of Hindu priests and Muslim sheik, of eunuch, farang, and devadasi; a world of violence, passion, and heartbreak; of unexpected wonder and enduring love.

What listeners say about Tiger Claws