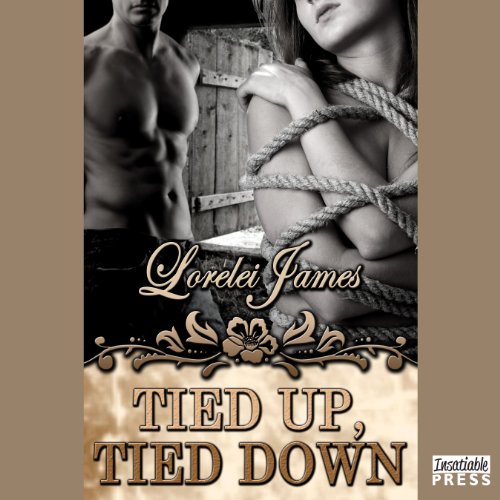 Tied Up, Tied Down

Businesswoman Skylar Ellison is firmly in control of her life. So getting tangled up with a sexy Wyoming cowboy - and conceiving a baby in the parking lot of a honky-tonk - wasn't in her plan. Since it appears the daddy has taken off for greener pastures, the only thing to do is pull up her bootstraps and carry on alone. Cattle rancher Kade McKay returns home after a year on the range, and is knocked for a loop when he learns he's the father of a three-month-old baby girl. When Skylar refuses to marry him, Kade grits his teeth, moves in and plays house by her rules to prove he's a man in for the long haul. Despite Skylar's insistence they are to remain strictly parenting partners, their old passions flare hot as a brush fire, spurring Kade to demand absolute sexual surrender from the headstrong woman. Skylar willingly submits her body to the hot-blooded cowboy but she's leery of handing Kade the reins to her heart. Can Kade convince Skylar the wicked sex games aren't a temporary distraction? Or will he have to bust out the ropes to show her he wants to be tied to her.forever? Warning: this book contains: no holes barred kinky sex scenes, wicked rope play, blunt language, and yowza! lots of hot cowboy nekkidness.

What listeners say about Tied Up, Tied Down

I enjoyed this book and the narrator did a good job of bringing the characters to life.

I've read every book in this series at least twice. the story is beautiful, the characters are sexy and then narrator is fantastic! For me, this is one of those series that I love to come back to and revisit every now and again.

This series is just my binge thing. I have zero shame fawning over the McKay boys. Lorelei James bowled me over yet again.

Awe I love Kade with his daughter! That is the best thing about this book in my opinion. I didn't love this book but I did enjoy Skylar and Kade''s story, it was HOT and sweet. While they have an unconventional start, they find their way. I really did enjoy all the relationships in this book. Skylar & India for example, even though they didn't have an easy life or easy relationship, in the end they are sisters and they watch out for each other.

I'm feeling like a broken record with the narration but it really bothers me that she doesn't give any of the characters an accent. They are cowboys and in my head they have a southern accent.


They only dated briefly but Kade fell hard and fast. Unfortunately, things didn't work out and they broke up and went their separate ways. Kade was going through a hard time and he volunteered to live on a remote area of the McKay ranch for a year for a cattle grazing experiment. In the mean time, Skylar discovered was pregnant with Kade’s baby. Not knowing where he went and not having anyway to contact him, Skylar was on her own. When Kade returned a year later and realized he had a three month old daughter with Skylar - whom he’s been in love with since before they broke up - he becomes determined to be a father to his daughter and charm his way back into Skylar’s bed and ultimately her heart.

Rebecca Estrella is a very talented narrator. Her voice changing skills are magic and she always captures me and hold me in with-in a story...

Kade is the sweet and sensitive cowboy that defies the wild Mckay bad boy reputation of his family. He has to suffer the repercussions of his twin brother's bad behavior. Skylar is a no non-sense, driven business woman who has serious trust issues so when Kade pretends to be his twin brother while dating Sklylar the fallout has serious consequences. It gets hot and sexy when Kade shows Skylar how good it feels to give up control.

Not thrilling but goof

I found myself missing an edge or excitement in this story.
The sex is spicy but I had a hard time caring about these characters. I'm also not a big fan of a writer introducing me to so many other characters that I can't keep track and don't care to. There was lots of useless chatter between these side characters. It was almost like this book was a vehicle to promote the other books of the writer.

While I liked the main characters Skylar and Kade, the book needed a reality check. Plot: Sky gets pregnant and can't find Kade to tell him. Kade finds out a year later and insists on being part of baby's life.

First, Kade is an identical twin who is always being mistaken for his disreputable brother. When confronted by Sky (who was stood up by twin), Kade didn't pull out his wallet to prove his identity. No, he pretends to be the bad boy brother. Why???

Next, Kade volunteers to work in the Wyoming wilderness for an entire year, where Sky can't tell him the news. However, during that year, Kade was informed of a death in the family and came home briefly for a funeral. Since he wasn't in the military or the jungle somewhere, it just didn't make sense. And who wouldn't take a satellite radio or something to communicate in case of an emergency.

There were some amusing moments when Kade and Sky were learning to parent together but not enough to keep my interest.

this is one of my favorite series and audiobook is absolutely fantastic. I love Kane and Skylars story.

Kane and Skylar begin their relationship with a lie by omission that then leads to their breakup. The night of the breakup they hook up. Their first and only time together. Skylar gets pregnant. Kane is so upset about the breakup he takes a job out in a remote area where communication is near impossible. He is gone for about a year. He doesn't know that Skylar was pregnant and he is now a father. He tries to make them a family but Skylar is very resistant. Kane is determined to show her that he loves her and their child.

I had guessed that this would be risqué just by the title and it is. I was actually impressed that the author progressed it into a beautiful love story with balanced amounts of not for faint of heart sexually explicit sex. I give the book 5 stars but I couldn't overlook some issues I had with character strengths.. And I was not overly fond of the narrator.. But hey, everyone is different..what I dislike someone else will love..

Having dated Sky on a lie, Cade leaves his home for a year to try to find a way to put things right. When he returns home he has a surprise waiting for him. He needs to convince a wary Sky that he wants her her for real.