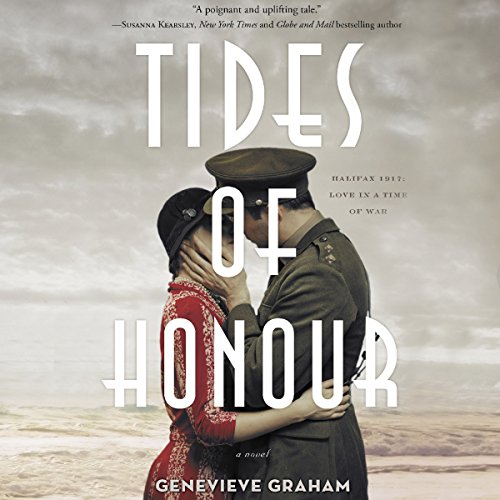 From best-selling author Genevieve Graham comes a novel of love, loss, and honor amid the horrors of war and its aftermath.

In the summer of 1916, Private Daniel Baker marches into battle with the boys of Nova Scotia's 25th Battalion. Out of brutal necessity, Danny has steeled himself against the trials and horrors of war, but he is completely unprepared to meet the love of his life in war-torn France.

Audrey Poulin has the soul of an artist. She lives alone with her grandmother in the quiet French countryside, where her only joy is in her brush and palette. When by chance she encounters Danny, the handsome young soldier captures her heart and inspires her painting. The young lovers believe that only together can they face the hardships the war brings.

But love is just the beginning. Mere months later Danny is gravely wounded at the Battle of the Somme, and his future is thrown into uncertainty. Soon he and Audrey find themselves struggling to build a new life in Halifax, a city grieving its lost men. As the gray winter of 1917 sets in, Danny's lack of purpose and Audrey's isolation continue to mount, pulling the two apart just as a new catastrophe threatens their existence.

Heartrending and enthralling, Tides of Honour is a novel of love and second chances set against Halifax's most devastating moment of the First World War.

A gripping tale that transported me to 1917

From the fields of France to the shores of Nova Scotia Graham captured the period and delivered a tale that will stay with you long after the audio ends. In Tides of Honour, she shares the story of  Nova Scotian soldier Danny Baker as he traipses through France in the summer of 1916 and meets a young woman named  Audrey Poulin. His trope holds up for the night in the barn of her grandmother's farm. Orphaned, Audry has spent the last ten years caring for her grandmother and the farm. The two feel a connection and begin a relationship through letters.

The story is told through the POVs of Danny and Audrey as their letter courtship grows. Graham takes us through their courtship, Danny's time in the trenches and eventually brings them both to the shores of Nova Scotia. Their fated romance faced obstacles as Danny carries the war with him and Audrey's passion for painting grows.

Graham made me weep, laugh, scowl in anger, and cry out in despair as I listened to Tides of Honour. Her ability to bring the period and characters to life through imagery and emotions created a timeless story with depth. I found myself caught up in the happenings and trials of the Baker family. I felt Danny's struggles as a man and provider as he dealt with the demons of war and fears of inadequacy. Graham has a firm grasp of PTSD, as well as the thoughts and expectations one faces. She allowed Danny to suffer, grow and ultimately heal.

Audrey is smart, bright, and a little insecure but I admired her strength and willingness to forgive. Graham doesn't go easy on Audrey, and at times I was angered by her actions and fears, but her story will make you ponder the question of what you would have done in this time and place.

This was my first time listening to Fajer Al-Kaisi, and I felt his narration from the Irish lilt to the tone was brilliantly done. His pacing and tone allowed me to slip easily into the world and enhanced Graham's story.

The story weaves in rich history, crime, social ladders, the suffragist movement and more creating an air of authenticity to the story. Fans of historical fiction, women's fiction, and family sagas will find themselves caught up in this rich, well-written tale.

This was a great story highlighting a tragic part in Canada's history. The author kept me entertained at the same time as being educated. It was only a coincidence that I was writing this review at the same time as the 100th year anniversary of the explosion.

Very much so, been googling since I finished reading this book.

The authors passion for the timeperiod was evident, research spot on, a captivating story.

Nothing, he did a great job.

In joy and in sadness

I guess when a couple is almost together at once then one should expect a bit of heartache along the way.

Danny met Audrey in French, in the midst of war. When he is sent home cos he lost his leg she follows. And then the real story begin. And that is what it was. It felt real.

Once he tells himself that he is luckier since he does not suffer from shell shock. But he clearly is not ok and he does have ptsd. Drinks too much, depressed (I mean he did loose a leg!), violent. Pushing way those who care. And yes I confess that there sure were times I did not like him when he was an idiot, but then it was not really him. It was war that had changed him and he tried to fight his demons but could not.

Since this is another time he also had trouble with his wife making money while he was useless.

So all credit goes to Audrey. She stands by him for better and for worse. It is not an easy life, but worry not, there is happiness at the end. And I am glad for it.

There was also this really interesting historic event woven into the story. The explosion in Halifax. I had no idea that it had happened. And at that scale! Mind blowing and horrible.

I enjoyed it. The ups and downs. The bitter reality of life.

Narrator
I have not listened to him before (I think). But I enjoyed his voice for women and men. He made it into a nice tale to listen at.

I really enjoyed this story of the experience of WW1 - of injury and loss and love. I knew nothing about Nova Scotia and especially the disaster that struck it. Danny and Audrey were characters I grew to enjoy and admire - especially Danny. The narrator was good, generally I don't seek out male narrators but Fajer Al-Kaisi did the job well.

Genevieve's writing and attention to detail makes each story she writes interesting and engrossing. I'd never read a story about Canadian history, and found it to be a fresh change of pace. Al-Kaisi did a great job with the narration, although at times I got tired of how he performed Danny's voice. Overall, it was a very nice read that puts you through many different emotions.

A war-torn and weary soldier, a woman who crosses an ocean to be with him, and a hard-fought, gritty story of love surviving so much. The deep-felt storytelling of the author paired with a new to me narrator bringing WWI era Canadian Maritime history to life made this a fabulous listening experience.

Tides of Honour is a standalone story of war, love, darkness, and healing. It's not an easy story to hear and brings to life the light and dark of this critical time in history. The first part of the story is told split narrative and split time line as it is in the present and then looks back to show how Danny and Audrey meet and then what became of them before they come together in Canada.

Most of this story swirls around the personal story of Danny and Audrey. Their romance is there, but its only the stepping off point as they have to work and suffer to keep it alive. Danny Baker, disillusioned, shell-shocked, amputee returns from the war with his pride in tatters and feeling less of a man when faced with his worried family and faithful young, and naive wife. Audrey Poulin married Daniel because she sees so much more in him than he does in himself after she is left to shift for herself in the world after her own painful past. He has to figure out what he will do with his future as he works the rough world of the Hallifax docks even as Audry has her artistic talent and dreams of something more. They have a strong love, but love is not enough when Danny is losing himself and Audrey must face her own temptation and struggles. The author wrote the pair of them with flaws and strengths and placed them in the crucible of war and disaster and personal darkness.

The historical backdrop was painted well whether it was the portions of Danny out on the battlefields of Europe, Audrey at a suffragette meeting in London, or the pair of them fighting to survive the explosion that rocked Halifax and played such a crucial role in the story. Danny and Audrey and the rest of the cast were people of their time so that the whole of this story wove together so well.

Fajer Al-Kaisi narrated Tides of Honour and did a wonderful job of a large cast of characters, emotions, and accents. I thought he caught a nice balance in how much emotion to portray especially when some scenes got very intense. I would definitely listen to more of his narration work.

So, all in all, this was a gripping, many times heartwrenching, but hopeful historical romance set against a dark time in history. I highly recommend it to those who like a strong historical foundation, authenticity in the plot and characters response to their situation, and a well-developed romance.