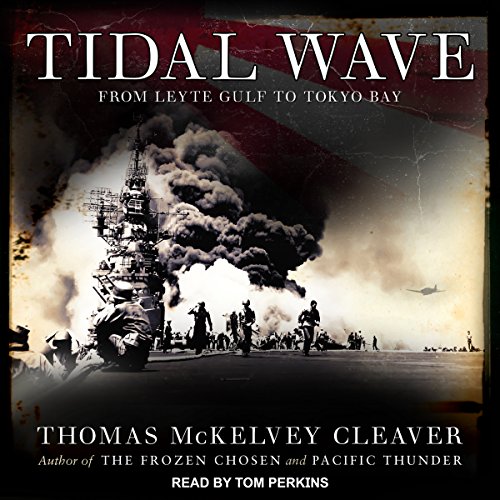 The United States Navy won such overwhelming victories in 1944 that had the Navy faced a different enemy the war would have been over at the conclusion of the Battle of Leyte Gulf.

However, in the moment of victory on October 25, 1944, the US Navy found itself confronting an enemy that had been inconceivable until it appeared. The kamikaze, meaning 'divine wind' in Japanese, was something Americans were totally unprepared for; a violation of every belief held in the West. The attacks were terrifying: regardless of the damage inflicted on an attacking airplane, there was no certainty of safety aboard the ship until that airplane was completely destroyed.

Based on first-person accounts, Tidal Wave is the story of the naval campaigns in the Pacific from the victory at Leyte Gulf to the end of the war, in which the US Navy would fight harder for survival than ever before.

What listeners say about Tidal Wave

I only got up to chapter 4 but so far this book goes into painful detail of unimportant events. A professor of history or a hard core expert arm chair historian might well like this. But for me this goes into too much detail about events that had no broader significance.

The subject of this book looked intriguing, after reading Tolland, Hornfischer and the author's other book Pacific Thunder I thought I'd give it a try. Unfortunately it has some serious flaws. It's horribly disjointed, going from fighter pilot minutia to quoting nearly the entire surrender speech of Hirohito in the same paragraph. I really don't know what to make of this, it's all over the place, shifting gears and focus to the point of distraction. Too bad didn't borrow it from the library instead of buying it.

minimal story, dry facts, audio seems computer constructed. disjointed at times. There are a few nuggets of interesting facts, but nothing inbellished.

I really enjoyed this book! Excellent narrative and a great story well worth telling aloud.