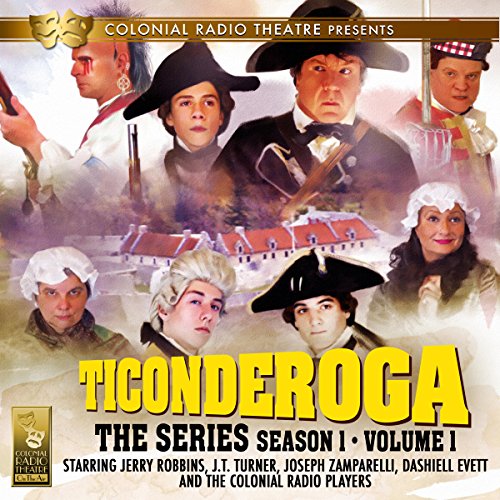 CRT's hit feature Ticonderoga is now a new series! The series picks up where the feature left off, with Captain Taylor, his son Adam, Mohawk scout Dagadawidah, and Captain Campbell of the 42nd Highlanders remaining at the fort with a small contingent while the main army has moved on to Crown Point, poised to follow the French into Canada.

Joining our original characters are Mrs. Caswell, proprietor of the new tavern, her son Micajah, tavern maid Gertie, as well as Colonel Jeremy Martin, Serjeant Rook, and Private Ian Haywood. Lots of musket-blasting action and adventure await you in Season 1, Vol. 1 of Ticonderoga - The Series.

What listeners say about Ticonderoga the Series: Season 1, Vol. 1

These audiobooks Powder River and Ticonderoga are the most exciting , funny, learning books I’ve ever heard. I’d rather listen to them than watch tv. Not necessarily saying much tho .

These books are addicting

I started listening to The Colonial Radio.Players on Sirius XM. All the books by Jerry Robbins and the Colonial Players are exquisitely done. It is an entertaining way to learn about history. Excellent! Also, I am thrilled to be able to hear the continuance from the first Ticonderoga cd. It felt like there was a lot more to say. Thank you ! Please keep up the wonderful work!

I really enjoy the historical stories They make history fun.
Just enough sound effects to make it enjoyable. Thank you

I got hooked on Ticonderoga before the actual series. Very well written and well played out. I really was impressed with how the actors seemed so natural and how they don't sound like they are following a script. And kudos to the new characters. Very well done.

Another home run by jerry robbins and crt. Cant wait for another 1. What a wonderful series this is going to be

Love the Colonial Theatre presentations. This series is as good as the orig Ticonderoga production.