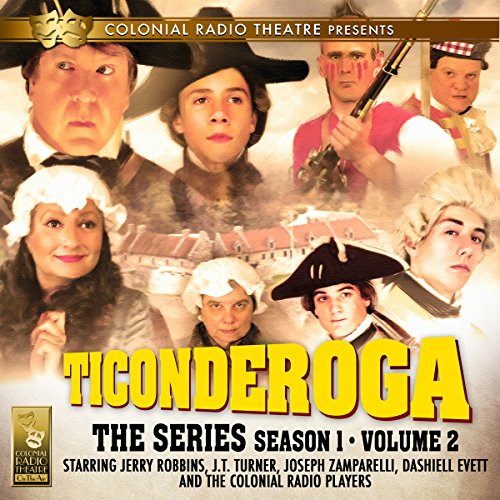 CRT's hit feature Ticonderoga is now a new series! The series picks up where the feature left off, with Captain Taylor; his son, Adam; Mohawk scout Dagadawidah; and Captain Campbell of the 42nd Highlanders remaining at the fort, with a small contingent, while the main army has moved on to Crown Point, poised to follow the French into Canada.

Joining our original characters are Mrs. Caswell, proprietor of the new tavern; her son, Micajah; tavern maid Gertie; as well as Colonel Jeremy Martin; Sergeant Rook; and Private Ian Haywood. Lots of musket blasting action and adventure await you in season one, volume two of Ticonderoga - the series.

Written and directed by: Jerry Robbins

What listeners say about Ticonderoga the Series

Great series, loved it. One of my favorite times vin history. Loved the period from 1750 to 1760.

loved it!! didn't see that coming with the Andrews and what was that kid Adam thinking

I really enjoyed all the episodes! just wonder where the next season is? hope it shows up

another great release from CRT

love all the suspense and action felt like I i was there, great show Jerry' Robbins.