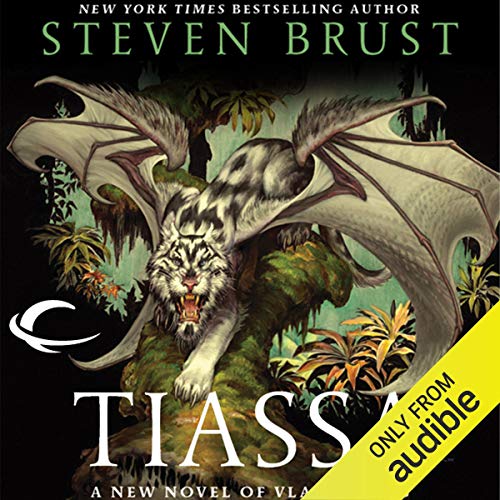 Once, Vlad Taltos knew his trade: he killed people for a living. That skill got him his foothold in House Jhereg, running the rackets for a chunk of urban Adrilankha. Later, things happened that left Vlad a changed man, on the run from the Jhereg and frequently involved in the affairs of Dragonlords, Empresses, and even Jenoine. Far more involved than the average human. Meanwhile, in the very distant past, one of the gods fashioned an artifact - a silver figurine of a tiassa, a winged panther-like animal.

To Devera the Wanderer, it’s a pretty toy to play with. To Vlad, it’s a handy prop for a con he’s running. To the Empire, it’s a tool to be used against the Jenoine. And to the Jhereg, it’s a trap to kill Vlad. As it happens, however, the silver tiassa has its own agenda.

Tiassa tells a story that threads its way through more than ten years of the remarkable life of Vlad Taltos - and, to the delight of longtime fans, brings him together with Khaavren, from The Phoenix Guards and its sequels. Khaavren may be Vlad’s best friend - or his most terrible enemy.
©2011 Steven Brust (P)2012 Audible, Inc.

What listeners say about Tiassa

Tiassa is really three separate stories each with relevance to past books; it fills in some loose ends bringing more clarity to past stories. The last part of Tiassa is about the title and also fills in some gaps from a previous story line but also brings us back to the present.
Most of Steven Brust’s stories are told in first person with the main character Vlad Taltos as the narrator; Tiassa is told mostly in third person having other characters tell the tale. I believe this gives the series a little more depth and for one book I found the dialogue and the perspective interesting; but I would miss Vlad’s humor and charm if he were not back for the next book in this series.
I would highly recommend reading/listening to the other books in this series before using a credit on this one as there are too many references to past books.
I have listened to the entire series and having read some of the earlier books long ago would heartily recommend the audio version. Bernard Setaro Clark is a true professional and a great narrator.

It's a pay off if done correctly.

If you listen to 11/12 in the Taltos series switch to the Khaavren Romances/ The Viscount of Adrilankha series (5 books in all), then back to this one or the one before(Yes a little late, I know but it will still work).
Fair Waring. they are stylized and hard to get through for some folks (my self included) but it gets easier and then pretty good.
Seriously there are a bunch of jokes and other things you just wouldn't get otherwise.

This one has some of the very best themes from the series combined into one overarching tale that will satisfy Vlad fans, Khaavren fans, Cawti and Norathar fans, and even Jhereg wiseguy fans!

Much better after the Khaavren Romances were read

I love all the Dreagara books. There is much to appreciate concerning Brust's prose.

if you're used to the quick-witted Vlad, you get that in the beginning a part of the book. At the end we switch over to the Phoenix guard, and the way they speak is.... trying at times. it feels very redundant at times, and overly polite...? I kind of imagined it as a language transition. a way that the dragaran talk to each other.

I really did enjoy this book

the book was spot-on the characters are interesting the plot line was full of action I really enjoyed the book overall it just was really riveting and entertaining and I really hope to finish up the series and see what the climax is.

fun for a long road trip.

fun for a long road trip. enjoyable and light. not to distracting while driving. fun

Not the best of the series

It was a little too scattered, and changed narrative styles too often for me. The story itself was fine, but it never grabbed a hole of me at any particular point. the narrator did an alright job, but a lot of the character voices blended together.