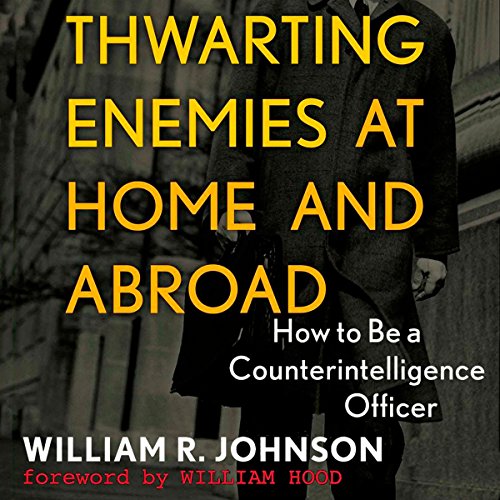 Thwarting Enemies at Home and Abroad

How to Be a Counterintelligence Officer
By: William R. Johnson
Narrated by: Gary L. Willprecht
Length: 6 hrs and 39 mins
Categories: Non-fiction, Politics
5 out of 5 stars 4.8 (4 ratings)

Thwarting Enemies at Home and Abroad

Originally published in 1987, Thwarting Enemies at Home and Abroad is a unique primer that teaches the principles, strategy, and tradecraft of counterintelligence (CI). CI is often misunderstood and narrowly equated with security and catching spies, which are only part of the picture. As William R. Johnson explains, CI is the art of actively protecting secrets but also aggressively thwarting, penetrating, and deceiving hostile intelligence organizations to neutralize or even manipulate their operations.

Johnson, a career CIA intelligence officer, lucidly presents the nuts and bolts of the business of counterintelligence and the characteristics that make a good CI officer. Although written during the late Cold War, this book continues to be useful for intelligence professionals, scholars, and students because the basic principles of CI are largely timeless. General readers will enjoy the lively narrative and detailed descriptions of tradecraft that reveal the real world of intelligence and espionage. A new foreword by former CIA officer and noted author William Hood provides a contemporary perspective on this valuable book and its author.

The book is published by Georgetown University Press.

" Thwarting Enemies at Home and Abroad will not only be a fascinating read for the general public but will also serve as a text for a whole new generation of CI trainees." (James M. Olson, former chief of CIA counterintelligence and author of Fair Play: The Moral Dilemmas of Spying)
"This classic work, packed with timeless principles and highly readable, is a vital addition to the bookshelf of any intelligence professional." (David N. Edger, former CIA operations officer, and visiting professor, University of Oklahoma)

Will help you understand the key concepts of CI, though the material is a little outdated, but what should you expect for a book written in the 80s? Many useful techniques discussed and should be considered when dealing with intelligence and CI in practice. Would like to get more current techniques in play these days, but again the subject matter discussed still is relevant in today's intelligence gathering and compiling.

This is not a spy novel

Would you consider the audio edition of Thwarting Enemies at Home and Abroad to be better than the print version?

Yes, only because I listen while I retouch my work and it would be difficult to read and do photoshop at the same time.

That is a silly question, think of this book as a textbook.

What does Gary L. Willprecht bring to the story that you wouldn’t experience if you just read the book?

If you could give Thwarting Enemies at Home and Abroad a new subtitle, what would it be?

It's listed on the CIA's reading list under books about operations.

The only thing these books make me do on a regular basis is lose my appetite especially when I see the topic of conversation, or several of them to be more accurate, walk past me as I'm reading. They have no respect.