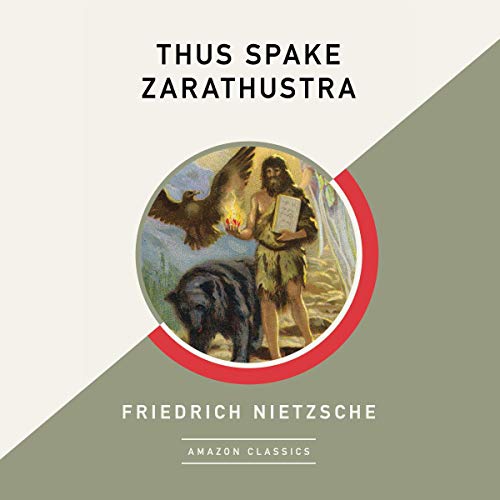 After ten years of meditative solitude, the prophet Zarathustra descends from his mountain cave to preach the power of the Superman - a human divinity emancipated from the construct of God. The Superman is free to create his or her own moralities, values, notions of good and evil, and purpose in life. Although people of the town are confounded, Zarathustra resolves to persuade the herd by illuminating the heights to which they can ascend by ignoring promises of otherworldly fulfillment.

Friedrich Nietzsche’s revolutionary philosophical novel, reprinted here in Thomas Common’s 1909 authorized translation, is the most influential work of one of the most significant and subversive thinkers in the Western world.

One huge problem :
They recorded the incorrect translation!!

Two huge problems with the translation :
1. Thomas Common changes nietzsche's intended tone, he makes the book sound romantic.
2. This translation begins with a forward by nietzsche's sister! As you get into nietzsche you will realize he held his sister in low regard - he considered her an imbecile, racist, and weak. Overall a bad example of Germans, of Woman, of Humanity. Nietzsche literally writes in Ecce Homo that she has no idea what his philosophy is about, yet here comes Mr. Common starting his nietzsche translation with a forward from her.

The thing is, Thomas Common was one of the first to translate nietzsche into English, so he lacked the perspective of later translators. Nietzsche may disagree here however, believing rather that Common unconsciously incorporated his romanticism into the translation, that he was possessed or embodied by his beliefs, that THEY used him as a tool to make themselves known via his art, via his translation. Whether he lacked perspective or lacked a soul, the fact remains that Common's translation is not worth reading or listening too.

GREAT LISTEN FOR THOSE WHO LOVE PHILOSOPHY. THE NARRATION WAS A PLEASURE TO LISTEN TO . THE MANY VOICES FOR THE ANIMALS WERE GREAT. TAKE TIME TO SIT AND LISTEN, HARD TO COMPREHEND WHILE MULTI TASKING.

The narrator is unlistenable. I really tried to focus on the content but the fake accent is really distracting.

Amazing book. Extraordinary narration. If it seems a tad much at first, give it a little time....you will come to appreciate it as the finest meat and wine.
If you want to put some heart and blood and fire and hammer in your heart and speech, listen to this book a few times. I just completed my third listen.
(I wish this narrator read other Nietzsche works.)