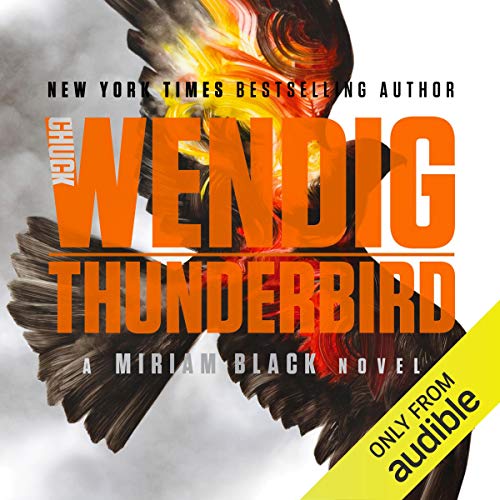 In the fourth installment of the Miriam Black series, Miriam heads to the Southwest in search of another psychic who may be able to help her understand her curse but instead finds a cult of domestic terrorists and the worst vision of death she's had yet.

Miriam is becoming addicted to seeing her death visions, but she is also trying out something new: hope. She is in search of another psychic who can help her with her curse but instead finds a group of domestic terrorists in her deadliest vision to date.

What listeners say about Thunderbird

these books are better on paper

love the author but these books are simple quick reads. doesn't suit the medium for me.

outstanding!
Chuck has woven another fabulous Miriam Black together.
This series is a favorite of mine.
I will read/listen to any novel this man puts out.
time and money well spent.

Loved it! Miriam Black is a vulgar delight. The antagonist being a militia is all too prescient. I really enjoyed listening.

This series keeps getting better and better. I have never read a series quite like this one. I liked the first and second book but wasn’t sure if I was going to continue with the series but I am glad I did. The reason why I wasn’t fully on board on the first two books (even though I did like them and the books held my interest), was that I could not connect at all to the main character. She is so refreshingly unique that I find it hard to describe her. The way she uses words is so delightfully vulgar and I mean creatively crude in the most funniest of ways. The way she describes the horrors and ugliness in life can be so intense that it would make me queasy so I would fast forward but that was the best part for my friend he said it reminded him of Stephen King’s prose. It maybe was my friend’s favorite part of the books but not mine; I enjoy the humor the most. These books are funny in an odd way. There is action, excitement and twists and turns. Usually, I can figure a book out because so many books are formulaic, not this one. You have to read the books in order otherwise, nothing will make sense. I’m hooked I can’t wait for the next book.

The Best Miriam Black Yet

Miriam Black is tough as nails, but there are a surprising number of dimensions to her, more than are attributed to many - if not most protagonists - and about a many as most real people have.

As usual, Miriam goes from one dire situation to another, making strange, unpredictable exits from them. She picks up new odd friends, reacquainted herself with old odd friends, and, as always, adds a host of dangerous enemies to her collection. All along, threads of the supernatural weave in and out so that you never forget what the true underpinnings of the story are.

The performance was brilliant. Emily Beresford is the perfect voice for Miriam. I found it enjoyable to sit in unexpected highway slowdowns on the way to work as it afforded me an extra ten minutes here and fifteen minutes there to listen to Miriam's exploits.

I highly recommend this book. Miriam Black fans will not be disappointed.