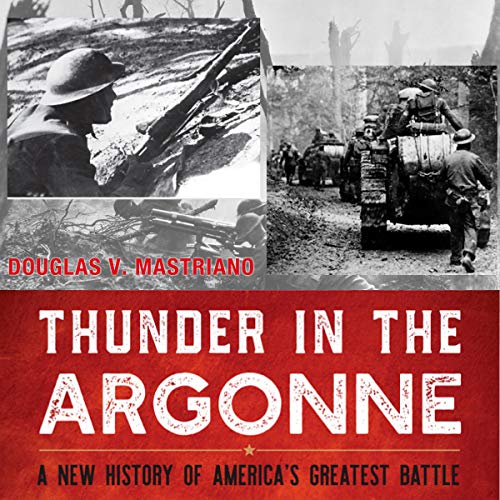 Thunder in the Argonne: A New History of America's Greatest Battle

Thunder in the Argonne: A New History of America's Greatest Battle

In July 1918, sensing that the German Army had lost crucial momentum, Supreme Allied Commander Ferdinand Foch saw an opportunity to end the First World War. In drafting his plans for a final grand offensive, he assigned the most difficult sector - the dense Argonne forest and the vast Meuse River valley - to the American Expeditionary Forces under General John J. Pershing. There, the Doughboys faced thickly defended German lines with terrain deemed impossible to fight through. From September 26 through the November 11 armistice, US forces suffered more than 20,000 casualties a week, but the Allies ultimately prevailed in a decisive victory that helped to end the Great War.

In Thunder in the Argonne, Douglas V. Mastriano offers the most comprehensive account of this legendary campaign to date. Not only does he provide American, French, and British perspectives on the offensive, but he also offers - for the first time in English - the German view. Mastriano presents a balanced analysis of successes and failures at all levels of command, examining the leadership of the principals while also illuminating acts of heroism by individual soldiers.

The Meuse-Argonne Offensive is widely regarded as one of America's finest hours, and the amazing feats of Sergeant Alvin York, Major Charles Whittlesey of the Lost Battalion, and Lieutenant Sam Woodfill - all accomplished in the midst of this maelstrom - echo across the ages.

The book is published by The University Press of Kentucky.

"Mastriano's command of the sources enriches the book throughout." (Michigan War Studies Review)

"An excellent read for anyone interested in World War I, the AEF, or the American soldier under fire." (NYMAS Review)

Reader needs to meet a period

The reader never met a paragraph or period that he felt needed a separate breath taken, or a new thought by the writer that needed the grace of a pause.