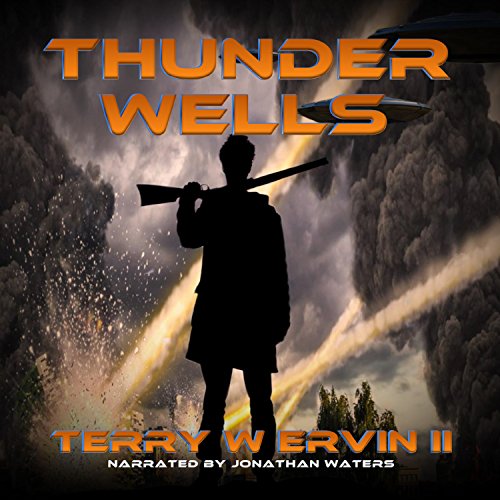 No one ever said surviving an alien invasion would be easy.

Jack Fairbanks made it through the initial wave of attacks, but now the Mawks have seeded the Earth with dozers and crawlers, tracking beasts that crave human flesh and are bent on hunting the remnants of humankind to extinction.

Joined by Lucia, a hardened urban survivor, Jack finds himself caught up in a secret plan to turn the course of the invasion. Can a college sophomore and a ragtag force of soldiers survive when the Mawks descend from orbit and begin their final assault?

I am always a little hesitant about diving into alien invasion novels, despite my love of the post-apocalypse and sci-fi genres. Thunder Wells blew my negative expectations totally out of the water. What a fantastically crafted story this turned out to be. Yes, there were aliens, but their presence didn't overtake or detract from other aspects of the story. Nothing about the plot was hokey or entirely unrealistic. (However, I must air my reservations about whether or not large groups of people would voluntarily agree to regularly eating dry dog/cat kibble when food resources are scarce.) The love interest of main character Jack is developed and portrayed in an organic, realistic manner. The survival and warfare techniques described by the author seem plausible. Even as the author describes the aliens' technology, it isn't so far-fetched it turns me off the story. (My fiction needs to bear at least some passing resemblance to non-fiction, I guess!) Overall, I was surprised at how much I enjoyed Thunder Wells; with its well-written storyline, thoughtful ending, and superb narration. Do give this one a listen because it won't disappoint!

I was provided a free copy of this audiobook by the publisher in exchange for my unbiased review. Many thanks to the publisher for this opportunity!

Thunder Wells didn't disappoint, Ervin keeps you in suspense and puts you in the battle for the human race.

Would you listen to Thunder Wells again? Why?

The story is more of a 3.5 stars for me. It was a very entertaining, engaging and enjoyable story. I wasn't quite sure what to expect when I started this book. I was pleasantly surprised. It didn't take long for me to be pulled in completely. Although I would definitely listen to the book again I would have liked a little more detail on some things. It would be really interesting to get a story about how the invasion started and where the characters were at the time and how they survived in more detail.

Of coarse Jack, followed closely by Lucia. You can't help but root for them in their battle to survive not only the aliens but the worst humanity has to offer. they are both just regular people trying to survive.

Have you listened to any of Jonathan Waters’s other performances before? How does this one compare?

This is the first time I have listened to a book he has narrated. He did a great job with the narration.He was the perfect narrator for this story. Nice voice that is easy to listen to for long periods of time. Clearly spoken with a nice even pace. Good character voices.Both male and female. His tone and delivery for each character was great. He brought the characters, their emotions and the story to life though his narration. Very enjoyable.


Was there a moment in the book that particularly moved you?

Can't say without giving away any spoiler.

Yes, because it's refreshing to read a survival story where the author didn't start pushing his political views, and no zombies.

that the main character was not some bad ass survivalist, but just an ordinaryguy who had to learn to survive.

the main females voice was very sexy yet strong.

i was very happy with the way the aliens were portrayed.

This was a cool adventure story set in a post alien invasion world. I really enjoyed the experience and Jonathan Waters is a fantastic narrator. The story is pretty fast paced and it was hard to stop listening once I started because you want to find out what will happen. I even sat in my driveway for several minutes just to get to the end of a combat scene.

Alien invasion with some twists

The earth has been invaded. The population has been decimated. From billions down to millions. The remainder of the population faces plagues, being hunted by alien creatures, and of course the evils of mankind itself. Our protagonist is a man trying to survive in his own piece of territory, he will find and lose allies and friends. He will travel to do battle with the aliens themselves. The secret of the thunder wells will be revealed. The alien invaders themselves are refugees fleeing from another conquering species. Perhaps they will be revealed in future books. Well written and narrated. Great listen. I was voluntarily provided this free review copy audiobook by the author, narrator, or publisher.

This was a nice little tale about what happens when Aliens land and take over the world.
The storyline was good though I did wish it talked more about the beginning of the invasion of the story. It kind of starts after the aliens have landed and been there a while.. I would've loved to be known details about how that all happens

I asked for, and I would like to thank the author, narrator, or publisher for providing me this audiobook at no cost in exchange for an unbiased review via Audiobook Boom.

I received a copy of this audio title for free in exchange for an unbiased review.

I found Thunder Wells to be a solid, fun adventure. The story picks up well into an alien invasion. The world has been decimated and those lucky enough to still be alive have to deal not only with other survivors who will gladly kill them for their supplies, but roving alien creatures that the aliens have seeded the planet with. The story focuses on Jack, a college student and survivor who is living in a park and it follows him as he gets caught up in humanity's last effort to strike back and win back the planet. While I would have loved to seen what happened during the early days of the invasion, perhaps a prequel will be written sometime down the road, the book is quite entertaining. Plenty of action with an interesting cast of characters.

This is the first book I've heard narrated by Jonathan Waters and I must say I was pretty impressed. He has a good voice with clean/clear delivery. Some narrators who attempt to do 'voices' for the various characters often times end up being more distracting than anything else, but that is not the case with Mr. Waters. He delivers a range of voices/accents which actually enhances the storytelling. I look forward to checking out more of his work in the future.

The reason I list this as a five star:
Jonathan Walters gives us a performance that expresses the very emotion of the characters and story. His rendition gives each character a voice that you easily recognize and follow through out the story. His tone of voice is smooth and enjoyable. Terry W Ervin has written an intriguing post alien invasion. He is able to have your attention and interest even during the character and story building. This continues through out the book and leads into what could be a very interesting sequel . Best of all it is not a cliff hanger, he neatly ties together the events and lives, leaving you very satisfied.

Although a little dry i found this story very enjoyable.
The characters and action are very realistic to what you wouke expect in an invasion and we feel very quickly for the way of life and the choices forced upon the world because of it.
The slog through the desolate USA and the mentioned events remind me very much of that of the 2nd Mass Militia and their fight to stay alive and on mission from the popular TV series Falling Skies.
Narration was good but could maybe have served better if a little less gruff and dry, maybe the fault of the writing?.
Saying this I'd still give both the author and the narrator a try in future endeavours.
This book was gifted to me in exchange for an honest review and as such is my own opinion.

"It all reminded me of what life had been like.."

First they knocked out our technology, then the aliens arrived. They manipulated the weather and millions drowned, poisoned crops and introduced a virulent flu virus to kill everyone else. This failed: humans were stronger than they thought. But the seeding of the world with man (and dog) eating monsters, the crawlers and the dozers, was far more successful as was the unfortunate predisposition for people to destroy each other in their desperate desire to survive.

Jack is a survivor. And this story is told, in the first person, from his point of view. Jonathan Waters becomes Jack very believably as he recounts the story of how he firstly forms a back watching partnership with Lucia, another formidable loner, then together they become part of an attempt to fight back against the alien invaders who want their home for themselves. Mr.Water's narration is clear, well paced and kept low key even in the midst of fighting. It seems right, somehow, fitting with the character he is portraying. And his voicing of the other characters, and in particular Lucia, is distinctive and appropriate.

There is an underlying feeling of loss and sorrow to this book so often not present in other survival stories. Although the fight scenes, and there are many, are vivid and very well written, it is this sense of the bleakness of what is left that I personally found most harrowing. My thanks to the rights holder of Thunder Wells for freely gifting me a copy, via Audiobook Boom. It was an enjoyable and worthwhile book which I can happily recommend to any reader with an enjoyment of science fiction, adventure or post apocalyptic stories with a human touch.