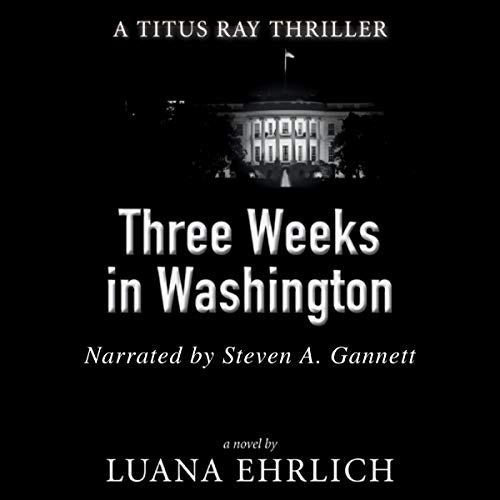 By: Luana Ehrlich
Narrated by: Steven A. Gannett
Free with 30-day trial

CIA intelligence operative Titus Ray arrives in Washington, D.C. on the day a terrorist enters the Washington Navy Yard and murders five people. Convinced the incident is connected to a Hezbollah plot to use chemical weapons on an American city, Titus jeopardizes his own career to interrogate the killer and learn the truth.

After the shooter reveals the identity of an Iranian deep-cover operative living in Washington, D.C., Titus embarks on an intelligence operation spanning two continents and exposing an Iranian general obsessed with destroying America.

As time runs out, Titus engages the enemy in a treacherous game of cat and mouse to save the lives of thousands and defeat the terrorists. Can his faith sustain him as he faces his greatest challenge yet? Is he willing to lose Nikki to save his country?

What listeners say about Three Weeks in Washington

I live in the DC and understand the Intelligence business very well. I did enjoy the previous narrator better but the writing is so good it doesn't matter. As a dog person, I also appreciate the introduction of Stormy. Finally, love the way rhe author us slowly introducing Christianity to the storyline. Can't wait for the next installment!

A growing fan of Titus Ray

This is the 3rd book in the Titus Ray series I've listen to. i like that is a clean thriller, but does not sacrifice the suspense. It did take me a few chapters to get used to the narrator, but I appreciated his range as the story progressed.

Would you listen to Three Weeks in Washington again? Why?

Not sure. IT is a bit of a thriller so knowing the end kind of spoils the thrill.

What does Steven A. Gannett bring to the story that you wouldn’t experience if you just read the book?

Any audiobook always adds to the realness of the experience as long as the narrator does a good job. Steven takes a little time to get used to as he is definitely different than the person that did the first two, but after a chapter or two his style becomes very enjoyable as well.

Looking forward to the next one. You really need to start with number 1 to get the feel for Titus and his development.

The reader was not that good. Voices were too close sounding. pauses in wrong places

Another great installment to the Titus Ray series. I love how the characters keep growing.

Exceptional is an understatement

Just when you think you can't get any better then the previous novels, this one comes along and blows it outta the park. Love the characters and when your engrossed in this novel it's like your literally a grasshopper on the windowsill as opposed to being a pesky fly on the wall. Keep them coming, I am totally knee deep in this. Makes you feel like the author herself was CIA!!! AWESOME STORYLINE!!!

I really enjoyed this story. The narrator on this story was okay.
This story was so good. These Titus Ray stories are really addictive,
I just wanted to carry my iPad around with me everywhere so that I could listen to the story unfolding to find out how Titus Ray was going to figure out how to complete his mission. This story was Christian and clean.

I really enjoyed the first two books but this book has a different narrator. This guy sounds like he’s reading a second grade story. On top of that, it seems like half of the book is a recap of the last two books and I’m only on chapter 6. I just couldn’t endure anymore.

I enjoyed the change of narrator, as I had been close to abandoning the series because it was two fluffy and feelings oriented for a spy story. The new narrator, with an accent a bit like Billy Bob Thornton, seemed to bring more grit back to the series. But I found this one incredibly slow, with a little action but endless conversations and the 'action' was going from one conversation to the next. It's so slow moving and you can figure out how things are going to turn out. I even figured out the topic for the next book despite sleeping on and off through the last quarter of the book. I really didn't care about any of them and if I did, it was obvious how things would go anyway. I'm done with the series.