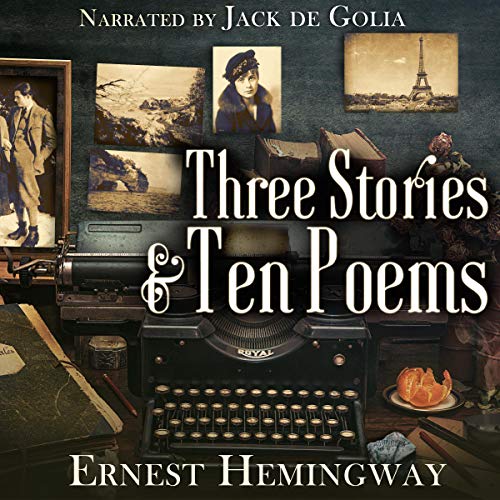 When Ernest Hemingway (1899-1961) published Three Stories and 10 Poems in 1923, he was 24, a wounded veteran of the Great War, and still three years away from publishing his debut novel (The Sun Also Rises). So the "3 Stories" give us a unique look into Hemingway's developing writing skills and his very particular areas of creative interest.

Born in Oak Park, Illinois, to a physician father and musician mother, Hemingway by his teens had already been a reporter. Then, at age 18, he drove an ambulance on the Italian front in World War I, where he was seriously wounded. Before he returned home in 1919, he'd fallen in love with a Red Cross nurse who later left him for another man. That experience affected his future relationships with women and each of his four wives.

In September 1919, he went on a fishing and camping trip in Michigan's Upper Peninsula. The following year he returned to Michigan for a time. These trips and his feelings about women likely are in the mental mix for the story "Up in Michigan".

After marrying for the first time in 1921, Hemingway lived in Paris where he developed his writing style under the influence of an ex-patriot American community of writers there. He also began a pattern of leaving his wives before they could leave him. His attitudes about marriage and women, and his experiences in Italy play out in "Out of Season".

"My Old Man" is set first in Italy and then in Paris and focuses on a loved and attentive father, who yet may play beyond the rules. All three of these stories seem well seasoned with autobiographical inspiration.

The 10 poems run the gamut of Hemingway's interests and experiences at the time, from soldiering to the sea to suicide (which Hemingway ultimately chose to end his own life, four decades later).

What listeners say about Three Stories and Ten Poems