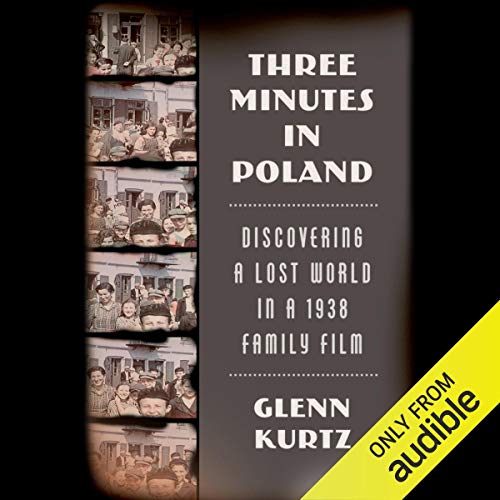 The author’s search for the annihilated Polish community captured in his grandfather’s 1938 home movieTraveling in Europe in August 1938, one year before the outbreak of World War II, David Kurtz, the author’s grandfather, captured three minutes of ordinary life in a small, predominantly Jewish town in Poland on 16 mm Kodachrome color film. More than seventy years later, through the brutal twists of history, these few minutes of home-movie footage would become a memorial to an entire community - an entire culture - that was annihilated in the Holocaust.Three Minutes in Poland traces Glenn Kurtz’s remarkable four-year journey to identify the people in his grandfather’s haunting images. His search takes him across the United States; to Canada, England, Poland, and Israel; to archives, film preservation laboratories, and an abandoned Luftwaffe airfield. Ultimately, Kurtz locates seven living survivors from this lost town, including an eighty-six-year-old man who appears in the film as a thirteen-year-old boy.Painstakingly assembled from interviews, photographs, documents, and artifacts, Three Minutes in Poland tells the rich, funny, harrowing, and surprisingly intertwined stories of these seven survivors and their Polish hometown. Originally a travel souvenir, David Kurtz’s home movie became the sole remaining record of a vibrant town on the brink of catastrophe. From this brief film, Glenn Kurtz creates a riveting exploration of memory, loss, and improbable survival - a monument to a lost world.

What listeners say about Three Minutes in Poland

Very detailed. Takes some concentration. But an interesting account of the author's journey to bring to life the people in the film which was a huge and comprehensive task.

Get this book! You will not regret it.

Glenn Kurtz has written something that transcends categories. It is a detective story; with the picture of a community and its mysteries coming into focus after fascinating and laborious research. It is an intimate kind of history told through ordinary people surviving extraordinary times. It is also a meditation on memory and loss. In this way it transcends its subject matter and serves as an open door for us to examine our own lives and communities; what is forgotten and what we choose to preserve against the endless march of time.
The reader has also done an extraordinary job with the nuanced dialects of the characters portrayed. In every aspect I love this book.

A beautiful story of a journey to the past. Very moving, sad, but a valuable look at the past.

Rambling. A ton of town and names thrown about. It makes this story hard to follow.

Not only is 3Minutes a great read/listen, it has laid the foundations for the offspring of lost generations to find their "roots" and for survivors to reclaim their childhoods, murdered family members and native home. Kurtz's book is a gift to all. Kurtz weaves the discovery, detective work and intrigue into a lively and gripping narrative. His documentation of the Jews' suffering under the evil Nazis is a poignant reminder in the current waive of neo-Naziism. A must read!

An amazing, absorbing story. I couldn't get enough of it. When I finally reached the end I was both relieved and heart-broken. Relieved , because of so much pointless suffering and destruction. Heart-broken because Glenn Kurtz has made such a concerted effort to try to knit together the few broken shards of a community, in such a patient, methodical, persistent way.
And an extra big "Thank you" to PJ Ochlan for bringing the printed word to life in such an unexpected and perfect way.

An incredible story supremely well written. I loved the multiple voices of the talented narrator.

Three minutes in Poland - extraordinary tale , unbelievable
I didn’t think I was going to like this book in the beginning but
as you get more into the book you realise how amazing that 3 minute film became to people lives
Great narration