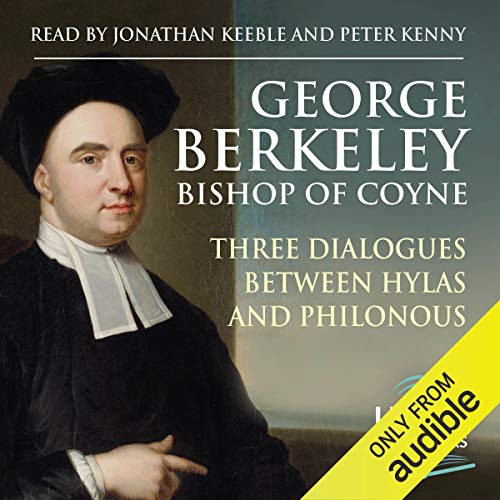 Three Dialogues between Hylas and Philonous was the final statement by the empiricist philosopher George Berkeley, Bishop of Coyne, (1685-1753) on his views concerning subjective idealism, couched in the famous statement ‘esse is percipi’ - to be is to be perceived (mixing Latin with a bit of English was Berkeley’s idiosyncrasy!).

In his first book on the subject, A Treatise Concerning the Principles of Human Knowledge, Berkeley proposed that the physical world exists only in the experiences minds have of it. It was published in 1710, but encountered robust criticism. In answer to this, Berkeley re-wrote the work in the form of three dialogues, casting himself as Philonous (derived from the Greek ‘lover of the mind’) in debate with Hylas (derived from the Greek for ‘matter’).

Set against a world view formed by Newtonian science and philosophers such as John Locke, Berkeley’s was a distinctive attitude: he did not deny that a table existed, but the key concept of it was based on the perceiver’s perspective and experience of it in the mind.

In Three Dialogues (set in a ‘Platonic’ garden), Hylas begins by challenging Philonous that he denied the existence of material substance. ‘What!’ says Hylas. ‘Can anything be more fantastical, more repugnant to Common Sense, or a more manifest piece of Scepticism, than to believe there is no such thing as matter?’ And Berkeley in the guise of Philonous replies: ‘Softly, good Hylas. What if it should prove that you, who hold there is, are, by virtue of that opinion, a greater sceptic, and maintain more paradoxes and repugnances to common Sense, than I who believe no such thing.’ And the scene is set for the debate. Philonous emphasises (and persuades Hylas) that it is the mind’s interpretation of what is perceived by the senses that really matters.

However, Berkeley still argues for the traditional view of the Christian God as a creator - and, significantly, some eight years after the publication of Three Dialogues, took Holy Orders, and eventually became Bishop of Coyne. Presented here in dialogue form, Berkeley’s most influential work proves an entertaining and stimulating work of philosophy as the two characters come to life in the spirited reading by Jonathan Keeble and Peter Kenny.