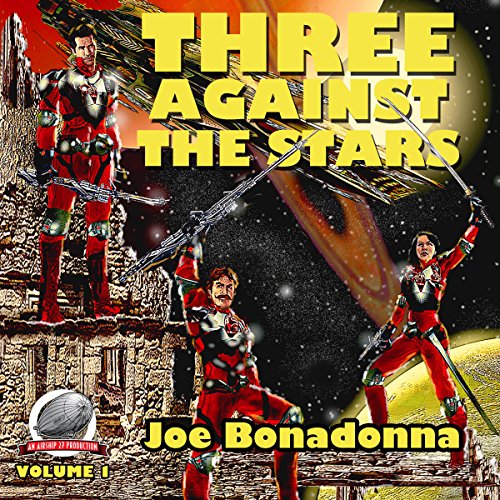 Three Against the Stars

On the distant alien planet of Rhajnara, a conspiracy created by the facist Khandra Regime is set into motion to overthrow the rightful Rhajni Republic and instigate a policy of ethnic-cleansing.

The conspirators are cunning, and it seems nothing in the universe can derail their mad apocalyptic scheme. Nothing that is, but three rambunctious Space Marines from the Third Regiment Company E of the United States Space Marines assigned to Rhajnara with the Terran Expeditionary Force.

Sergeants Fernado Cortez, Seamus O'Hara, and Claudia Akira are the most unlikely trio ever to don jarhead camouflage and become military heroes. To their superiors they are wild, reckless, and incessant troublemakers always in the thick of things. Yet their courage, loyalty, and devotion to duty prove them to be the toughest Devil Dogs in the Corp. Now, with the aid of a Medical Corpsman named Makki Doon, a young Felisian native proto-feline humanoid, these three futuristic musketeers are about to become the one factor capable of exposing the traitorous Khandra coup. But to do so they will have to put their lives on the line one more time, and risk all to save the day, facing off against incredible odds.

To save an empire they will truly become...three against the stars. Joe Bonadonna delivers a fast-paced, action-packed space opera fans of Edmond Hamilton and E.E. "Doc" Smith will not soon forget.

What listeners say about Three Against the Stars

I liked the story other than the narrator read to fast. Made it difficult to keep up with it if you had a couple seconds distraction.