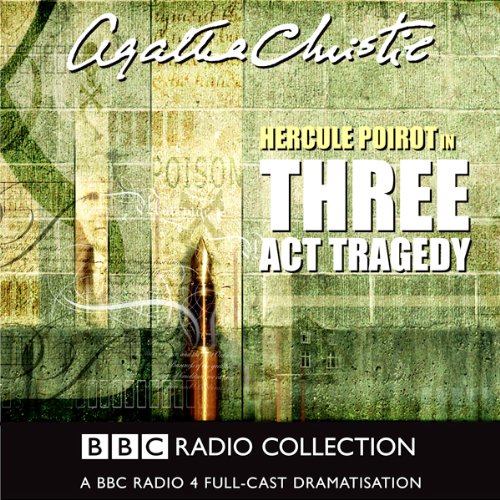 Hercule Poirot is a guest at a weekend house party, given at the Cornish clifftop home of the celebrated actor Sir Charles Cartwright. The other visitors include keen amateur detective Mr Satterthwaite and distinguished Harley Street nerve specialist Sir Bartholomew Strange. Death visits the house soon after Poirot's arrival, the victim an elderly clergyman who's only had a sip of dry martini. What else was in the glass? Are natural causes to blame... or murder?

In Monte Carlo a short time later, Poirot and his aquaintances hear of another, similar death. Is this a mere coincidence - and can Poirot resist further investigation? Everyone concerned will be much relieved if he does. Meanwhile, a third tragedy is waiting in the wings...

George Cole, Michael Cochrane and Clive Merrison are amongst the cast in this adaptation of Agatha Christie's intriguing mystery.

Another Piorot Classic that gives a unique ending. Never saw it coming, with a Villian and motive surprise.

I always hate when Poirot takes a while to appear, but once again, it didn't disappoint!
Fantastic, unexpected twist at the end!!

Curtain call murder mystery at its best. Only Agatha Christie knows how to thrill in three dramatic acts to prove who her killer is. Clive Merrison aka radio Sherlock Holmes is part of this full cast production along with many other great British actors of the day which lends a theatrical slant as though we are at the theatre watching it all happen before our very eyes. It is all there, but did we see it? Wonderful.

As pleasing as you'd expect

John Moffatt and his supporting cast being pretty much perfect for the genre is always a given in this series. This story is also very strong, with a nicely judged payoff - always good when they make you feel that you might reasonably have guessed the answer but didn't. Full of memorable characters too - not as generic as some can be in Christie. She's also slightly trolling her audience about values too, which is also very deftly played... Among her best.

These are all such a joy to listen to! I picture the characters and get to know them

Nice twist. struggled a bit to be keep check of all the various characters but story made up for it. Theres a section where poirot disppears for a bit and i panicked haha. Full of humor you wont be disappointed.

If you love Poirot you will love this book. Being dramastised it is easy to listen to, follow chartacters and follow the story thread and just perfect for a relaxing and listening to on your holidays.