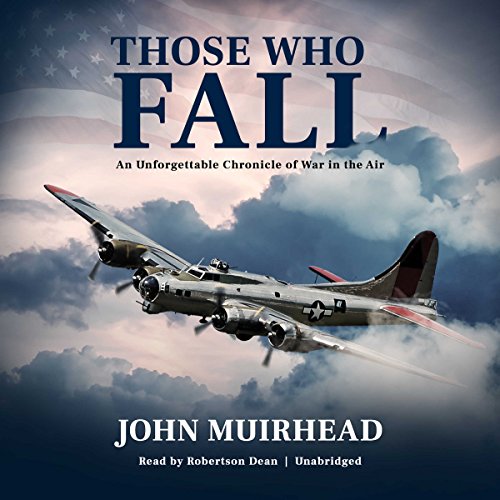 As a B-17 Flying Fortress bomber pilot, John Muirhead led missions into northern Italy, Germany, and Bulgaria during World War II. Ultimately, he was shot down and taken prisoner.

John Muirhead's re-creation of those years is a breathtaking mingling of ravaging horrors and silent, surreal images; of raw, tumultuous memory and elegantly paced narrative; of lightening humor and measured reflection.

Seldom has a listener been made to feel terror so viscerally. Rarely has a listener ascended the skies so thrillingly. And never has one felt so close to the numbing fear, the boredom, the eerie beauty, and the dislocated sensibilities of war in the air as in Those Who Fall.

What listeners say about Those Who Fall

If I had known what this book was I doubt I would have chosen it. A LOT of cursing and foul language. The book was more the inner thoughts of the pilot, philosophical in many ways. As that kind of book it is well done. But I was expecting more about the actual missions and history, not so much of the pilots thoughts. It was interesting in parts and dragged in others.

Great story, but too flowery prose

This was great story of one man’s experience flying B17’s with the 15th Air Force. It gave a good view of daily life, the mundane existence between missions and the terror experienced during those missions. It also describes life in a Bulgarian POW camp. The story was engaging and I looked forward to listening to it.

The only negative comment, I’d offer is that at times the author would lapse into very flowery descriptions and imagery—like he was trying to emulate the classic authors he quotes throw out the work. It just seems odd given the subject matter.

The performance was good and unobtrusive. Overall, I would recommend the “listen” to anyone trying to understand what life was like for WWII heavy bombers crew. My father served as the top turret gunnery on a B24 flying out of England, was shot down and was interned in a German POW camp until the end of the war. Listening to this book, helped me recall stories he told me as a kid.

Those Who Fall is an elegantly written memoir of fear, determination, friendship, courage, and the will to live. At its best, it's pure poetry.
Alas, I have to admit it: I'm not a big fan of Robertson Dean, and it's tragic that he's the narrator of so many fine books, all of which he fails to elevate or to deliver on in the manner which they deserve. Here, while he does a good job of dialogue (even tho' he's no master of accents), the narrative itself is delivered without much cadence, nearing a monotone most of the time.
Which is tragic because John Muirhead writes of the beauty of a child's voice, the desperation of a widow's loneliness, the unwillingness to get attached to the fate of the man beside you because that would make their ultimate and oh so likely death unbearable. He writes of the fear to run that next mission, the one that could be your last. He recounts riveting action of bombing runs on oil facilities, of airbursts of fire and shrapnel. He tells of trying to take care of the utterly shell shocked, of trying to find food and life within the confines of POW camps.
He writes of the misery of torture.
Those Who Fall has it all, and while Dean is less than sublime, he still can't turn this into a just-okay book.
It's brilliant! Not since Guy Sajer's The Forgotten Soldier have I truly felt war, boredom, horror, hope, so much.
By the way. It does seem to end too soon, but that's only because you'll want to know more of Muirhead's story. You will indeed care that much...

One of the Great Pilot Memoirs

I have read many pilot memoirs from World War II. This is one of the best. Muirhead was a B-17 pilot (having previously flown B-24s) based in Foggia. He was clearly an excellent pilot.

Most of the book is about Muirhead's life as a pilot, recounting not only the missions (sometimes milk runs and sometimes full of terror) along with the tedium of life on a somewhat isolated military base. His detailed character profiles of his compatriots are outstanding. His willingness to recall and reveal his raw emotions--including his efforts to isolate himself at some points--make the book. The book almost lets one vicariously experience what it was like to be there.

The rest of the book is about the experience of Muirhead and his crew after they are shot down. Muirhead and most of the men bailed out, but were quickly captured in Bulgaria. Muirhead recounts their experiences in captivity in great detail.

This book is written with more than a touch of poetry. It is what one might call lyrical at many points. Some may find this a bit off-putting, but I think it does a good job of conveying the raw emotion of being at war--when losing friends is a regular occurrence and when one never knows what moment may be his last.

Robertson Dean's narration is excellent. Dean may not be the right narrator for every book (and he seems to get more opportunities than most), but he is a good fit for this one.

There is one thing that bothers me a little about the book: It just ends. It ends on a fine note, but there is no epilogue about what happened to Muirhead or the others.

I have been able to find a little about Muirhead on the Internet, but there does not seem to be a lot out there. He wrote this book around 1987, over 40 years after the war and when he was approaching 70. He had what appears to have been a successful career as an engineer. He married Jean, who is referred to in the book, and they had at least one child. But there seems to be very little out there about this very interesting man. I wish I could find more.

The story ended with the Russians at some distance from the camp - no idea what happened next. I'm sure their arrival and the prisoners trip after could have been interesting. No luck.
Seemed odd to stop there.

Great book, I enjoyed the whole story . At times it seemed I was there

Some of the best writing I’ve experienced across any genre / style / topic. Left me wanting more.

If you enjoy flying or books about WW2 flyers don’t miss this one. Only negative is ending is to short.

Loved it, I wish the Author spend more time telling about the captivity and his journey back to the states. But I really enjoyed listening to it.

Superb personal narrative of a WW II B-17 pilot

This memoir captured my attention immediately a d kept it throughout the book. Too many works of the bomber operations become obsessed with the stats and fail to tell the personal human side. This account captures the pilot’s thoughts and interactions with his crew while giving insight into the flying of a B-17 in combat. Great reader too.

A beautifully written story. A very honest and authentic account of dealing with the incomprehensible reality of being in the midst of war and frequently facing death.