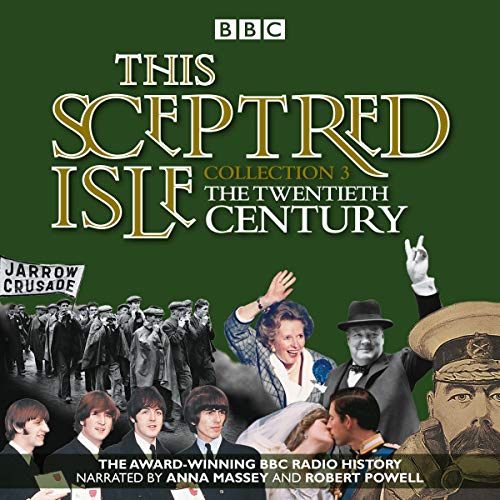 All five volumes from the landmark BBC radio series This Sceptred Isle: The 20th Century.

Christopher Lee’s vivid, compelling history tells the story of Britain from the death of Queen Victoria to the dawning of a new millennium. This collection includes the original volumes 1-5:

1901-1919: the Victorian era comes to an end, Suffragettes demand ‘Votes for Women’, the Titanic sinks and the Great War casts a long shadow.

1939-1959: the horrors of the Second World War and the onset of the Cold War, Indian independence, the founding of the NHS, the beginning of a new Elizabethan age and the Space Race.

Narrated by Anna Massey, with additional readings by Robert Powell, this is the definitive radio account of one of the most exciting and fast-moving periods in the history of the United Kingdom.

NB: Due to the age of these recordings, sound quality may vary.

What listeners say about This Sceptred Isle: Collection 3: The 20th Century

Really disappointed by this. Antiquated and uninspiring writing style makes it difficult to listen to. Eventually stopped as found I wasn’t really learning anything and would find myself switching off mentally while listening. Managed to make what should be an incredibly engaging story quite tedious. Often found the choice of subject matter strange, with lots of listening time dedicated to relatively uninteresting events, with just minutes on eg. WWI by comparison.

I love the way each piece is explained and put in its historical context. rather than a single narrator there are several from different sources which really bring to life and give added context and perspective. fantastic.

excellent. history storytelling at it best

As with the other BBC recordings in this series the focus is on telling the story of what happened, in addition to that there diversions into what else was going on at a particular time. for example the films released the music being listened to or what inventions were new. it is compulsive listening. I recommend starting with the first collection from 55BC. Imfir twentieth century history I would also recommend the BBC EYEWITNESS series to hear the real voices from the BBC archive.