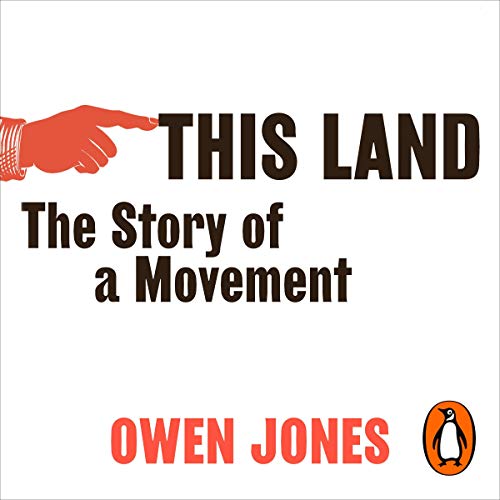 The number one best-selling author of Chavs and The Establishment returns with an urgent, revelatory account of where the left - and Britain - goes next.

On 12th December 2019, the left died. That at least was the view of much of Britain's media and political establishment, who saw the electoral defeat of Jeremy Corbyn's Labour Party as the damning repudiation of everything it stood for.

Yet, just over four years previously, the election of Corbyn as Labour leader seemed like a sea-change in politics: reanimating not just a party in apparently terminal decline but a country adrift, with a transformative vision based on a more just, more equal society and economy.

In this revelatory new book, Owen Jones explores how these ideas took hold, how they promised to change the nature of British politics - and how everything then went profoundly, catastrophically wrong. Why did the left fail so badly? Where, in this most critical of times, does that failure leave its values and ideas? Where does it leave Britain itself?

What listeners say about This Land

"History will undoubtedly be far kinder to the reluctant Labour leader than the judgment that currently prevails." This quote tells you all you need to know about Jones' revisionist attempt to reconcile all the evidence that the Corbyn project was doomed from the start, with his own role as a cheerleader and proponent of the same bad-faith arguments he likes to accuse others of.

I was interested in hearing the account of an insider about the lead up to Labour's worst election result in many years. However, it was excruciating listening to Owen Jones reading his own book. The contents were masked by the droning, boring voice of Owen. He tries to put some expression in his reading, but fails. He could have been reciting a telephone directory. It just goes on and on. Flat and monotonous.

The content, when I forced myself to isten, exposed the truly awful characters in this saga. The nasty, vile party members bully, argue and stab each other in the back. There is no loyalty. The lack of leadership in British politics on both sides is terrible, but this book depressingly shows that Labour is in dire straits.

Why does Audible have some authors narrate their own books? They are untrained and are an inferior choice compared to professionals.

A Superb and Fascinating Listen

This is an intelligent, passionate, and well reasoned account of a highly troubled country and its politics.

I have always admired Owen’s passion and willingness to enter into vigorous debate. He does so in this book with clarity and and even some humour!

In recent times, I have felt despair and sadness at where the UK is heading. This book has managed to lift my spirits and hope for the future.

I am delighted that Owen has chosen to read his book, which has added so much more colour, and is preferable to someone other than the author reading it. Highly recommended.

I had been eagerly awaiting the release of “This Land”. I even pre-ordered it !… “The Establishment” was an extremely engaging, interesting, evidence supported and informative read … Wow, what on earth happened with “This land”? This Land, just droned on and on. It read like a prepubescent, gossipy teenagers diary… He said, she said, but, sorry I can’t possibly say, who he and she are… This rushed, nonsense of a diary went almost, completely unsubstantiated, with absolutely no apparent point ..I’m bitterly disappointed, and want my money back please…. This must contravene the trade description act surly?… Knowing one or two folk who actually worked in LOTO offices, these ramblings bear no resemblance to what they were telling me…( A Den of Vipers, was often mentioned)! Oh Sorry, No, I couldn’t possibly say who these people are!…So disappointed that Own would appear to be a one-trick pony, I somehow feel kinda duped !

From Glastonbury to catastrophe

Guardian journalist, author and political commentator Owen Jones had a ringside seat during Jeremy Corbyn's leadership of the Labour Party for five years and this new book, narrated by the author, chronicles this fascinating period. We hear the story of how Corbyn was nearly not even on the ballot for the party leadership contest in 2015. Once elected, with the support of new party members on a the back of a campaign borrowed from Bernie Sanders that captured the imagination of young people and minorities he had to literally smash his way into his office. Corbyn set out a vision for fairer and kinder Britain based on social democratic principles turning away from the neo-liberalism of the Conservatives and New Labour. Against all odds, and despite the popular press deriding him as a no-hoper, Corbyn came agonisingly close to disposing the hapless Theresa May during the snap general election in 2017.

Surprisingly, this book is not universally complimentary of Corbyn as a leader and Owen Jones pulls no punches in outlining his weaknesses as a leader and as a politician. Must of this is due to Corbyn's lack of front bench experience and refusal to undertake media training, insisting instead that he spoke from the heart rather than a script and sometimes forgetting the keys messages he was supposed to deliver. Ultimately, it was the taint of antisemitism that Corbyn was never able to shake off that eroded his approval ratings with the public and his failure to engage in the Brexit debate where, according to Owen Jones, listening to Corbyn being passionate about Brexit was like "listening to someone reading a photocopier manual". He has a point as Brexit became the single most important issue during his leadership years.
From the Glasgow shipyards
To the Durham miners
To the Islington coffee shops
This Land belongs to you and me

If only Brexit had not got in the way. Oh no, Jeremy Corbyn.

Analysis of the Corbyn phenomena: it’s achievements and shortcomings

Owen Jones gives a more balanced view of Corbyn than I was expecting. As well as highlighting Corbyns many humane qualities and policies, it also draws attention to the former Labour leaders inability to deal with conflict or crisis, his shortcomings as a leader.
The book benefits from the detail that the authors close involvement brings, however at times the authors involvement in proceedings leads to obvious bias. While it gives balance to those on the left, it dismisses those on the right of the Labour Party. I’m sure that centrists did act unfairly and aggressively at times, but their portrayal at times is a little bit two dimensional.
For me the book does not sufficiently address the increasingly growing chasm that has arisen between two the strands that have traditionally supported the Labour Party: the middle class liberals and the socially conservative working class. Clearly there was a problem with Corbyn in traditional working class areas in the 2019 election and it felt like the book wheeled out Brexit too readily as an explanation for this.
The book ends on a hopeful note, drawing parallels between the current Covid crisis and the Second World War, identifying that the post war years saw voters turning their back on the Conservatives towards a more progressive alternative. If history is to be repeated, the book explains then we would have Corbyn to thank for this.

Well read is about the best I can say.

It's entertaining at the very least. As one would expect from Jones is a very rose tinted look at the Corbyn disaster. The length that Jones goes to in an effort to explain and excuse Corbyn's undoubted embrace of terrorists causes is at times genuinely hilarious.

A valuable read for the lessons to take, not fun

I think Owen wanted to write this to give a more balanced view of what actually went on, good and bad. In those terms, he's succeeded. As I'm a member of Labour and interested it was easy for me to listen to, if unsettling at times but if you are not that bothered for politics it might not be first on your list.

I was already quite aware of how dysfunctional Labour was for some time. The Conservatives aren't much better but do have better instincts for power (usually) and greater support among those with power and wealth. But the Conservatives are nothing great, largely Labour fails because it is disunited, out of touch and also because it contains elements so opposed to each other they would rather see the party lose than give ground to their opponents.

The book itself shows the rather expected incompetence of Corbyn and the lack of an effective operation most of the time. It also shows that when you get things lined up and working together and clear polices, you can get traction. The most extraordinary thing is that for Labour things have worsened after Corbyn, which is not covered in this book. It is hard to believe that Starmer, who very likely planned a leadership run for some time, seems to get everything not just wrong, but hopelessly wrong after taking 'total control' of the operation. That tells me as much as did the eventual failure of Corbyn and worries me more in many ways.

As far as this book goes, perhaps for anoraks or those who want to get a feel for what went on, a fairly middle of the road interpretation that's reasonable. But perhaps the message is that we need better people getting in to politics, regardless of whether it be right, left or centre with a true service ethos.

A really balanced narrative around corbynism. I still believe in the 2017 manifesto and the excitement I felt around that time and loved Corbyn honest approach however needed to understand where it all went wrong. thanks Owens Jones this really helped

Owen, as ever, has produced a fair, well researched and well balanced piece of literature. It is brilliantly written and well performed. I would highly recommend reading/ listening to this book, regardless of your political affiliations.