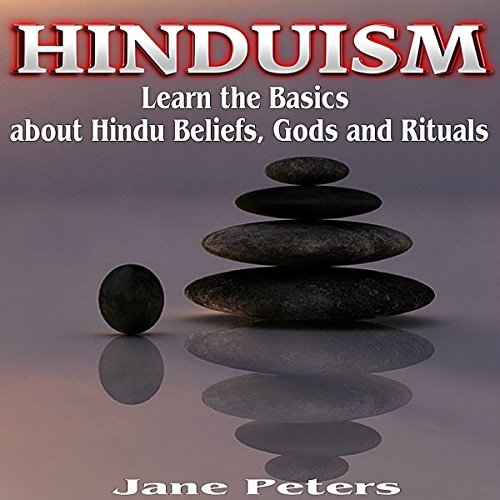 This audiobook contains an easily accessible overview of the Hindu religion, with a focus on those coming from the Western religions and cultures. While quite a few of us in the west are familiar with at least some aspects of the religion (karma, for instance), most of us lack any real depth of understanding of the complexities and nuances of one of the world's oldest and most diverse religions. I hope that by listening to this book you can at least begin to scratch the surface of this rich and intricate religion.

We will cover the basics of the belief system, including the concepts of karma, reincarnation, ahimsa, and the one Supreme Being. These concepts unite all the various sects of the Hindu religion, as well as all of the regional and familial variations in what is a rich and complex religion.

The pantheon of the gods is described, with an emphasis on each god's function. The rich symbolism present in their depictions is also explored, for a small sampling of the main deities. A full treatment of the symbolism is a subject worthy of a full semester college course. Not only is Hinduism rich in its diversity of gods and goddesses, it is also filled with many different rituals and festivals. Some of the most important rituals that punctuate the life of a Hindu are described. Rituals that are performed for pregnancy, birth, and death are common. Like we are accustomed to in the west, the Hindu religion also celebrates many holidays. I describe some of the most popular.

Finally, I give a brief overview of what can only be considered one of the largest collections of religious scriptures in the world. They number over 100, though not all are accorded the same significance.

This work is intended to serve as a jumping off point for you to begin your self-exploration of the world's oldest and third largest religion.

Listen to the audiobook today to learn more about this fascinating religion.

What listeners say about This Is Hinduism

Essential wisdom here. Spiritual principles that are timeless. I am really glad I listened to this.

I was curious about Hinduism and tried to listen t

I was curious about Hinduism and tried to listen to this while I am relaxing. It even made sense to a non-believer. I like the content and it is narrated very well.

Very brief and concise overview of Hinduism. Would Reccomend to anyone trying to begin their understanding of the relgion.

A basic overview of a complex religion

This book gives the “from 30,000 feet” overview of this complex religion. It is as advertised and gives you an idea of what to do next to learn more

Consice, easy to read, to the point. No nonsense talk. alsp avaliable in writen version

After reading other text on Hinduism this book was a great review. This book was concise and well written.

Excellent narration with crisp and subtle explanation. This would really help anyone who's wanting to experience true Mindfulness.

I enoyed listening to this,. Fantastic information

I enoyed listening to this,. Fantastic information for anyone who wants to understand what the Hinduism is really about

I am really enjoying listening to this audio book

I am really enjoying listening to this audio book .The emphasis on raising one's self to a higher level is a universal message everyone should aspire to.

If you wanna live it like royalty and behave as su

If you wanna live it like royalty and behave as such and feel free, I utterly recomend this wonderful auido book of spirituality.