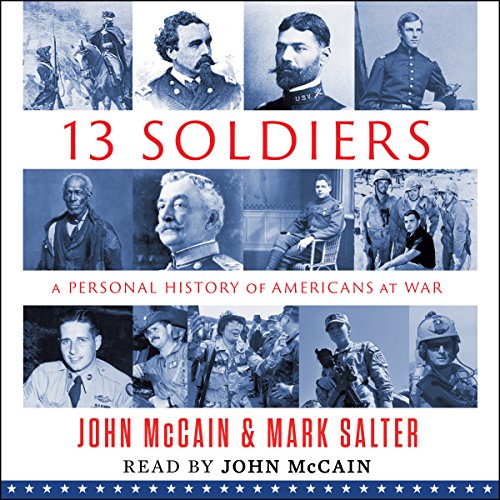 John McCain’s evocative history of Americans at war, told through the personal accounts of 13 remarkable soldiers who fought in major military conflicts, from the Revolutionary War of 1776 to the wars in Iraq and Afghanistan.

As a veteran himself, a member of the Senate Armed Services Committee, and a long-time student of history, John McCain brings a distinctive perspective to this subject. Thirteen Soldiers tells the stories of real soldiers through the years who personify an essential characteristic of combat, from valor, savagery, and terror to obedience, enterprise, and love. You’ll meet Joseph Plumb Martin, who at the tender age of 15 fought in the Revolutionary War; Charles Black, a freeborn African American sailor in the War of 1812; and Sam Chamberlain, of the Mexican American War, whose life inspired novelist Cormac McCarthy. Then there’s Oliver Wendell Holmes, an aristocratic idealist disillusioned by the Civil War, and Littleton “Tony” Waller, court-martialed for refusing to massacre Filipino civilians.

Each account illustrates a particular aspect of war, such as Mary Rhoads, an Army reservist forever changed by an Iraqi scud missile attack during the Persian Gulf War, and Monica Lin Brown, a frontline medic in rural Afghanistan who saved several lives in an ambushed convoy. From their acts of self-sacrifice to their astonishing bravery, the 13 soldiers profiled here embody the best America has to offer.

What listeners say about Thirteen Soldiers

I found the history of various individuals who fought in America's wars to be insightful and tragic as well as moving. I served as a nurse at the 91st Evac Hospital in Chu Lai, South Vietnam. I heard the stories and saw the results of men who gave all to save their comrades. The stories in this book moved me deeply. Two stood out for me, the story of the African American sailor who served so gallantly in the war of 1812 and the story of Corporal Red Cloud in Korea. Men who in their own country were often despised and faced terrible discrimination but gave their all to serve that country. Thank you for telling their stories.

John McCain, a Senator from Arizona and a former Navy aviator wrote this book about thirteen soldiers. The author identifies a single soldier, sailor, airman, or marine from each of American’s thirteen major wars to eulogize for courage under fire. The chapters follow the books basic format, setting the world stage, recalling the principal person’s prewar life and then describing the person’s performance of duty.

The Wide variety of characters from different race and gender from each military service makes for many fascinating stories. The book as a whole offers insights into life during battle. The authors cover ordinary soldiers going through difficult experiences. The story I enjoyed the most was of Medic Monica Lin Brown. I was familiar with most of the other story told. John McCain narrates the book.

All around average listen

Hearing about the soldiers from the most recent conflicts. Just returned from a deployment, interesting to hear their perspective.

Covered more of what life was like for those people in the conflicts. Too much history was covered.

Would you listen to another book narrated by John McCain?

Was Thirteen Soldiers worth the listening time?

Yes, but it didn't grip me as much as other books I've listened to. I used it for when I was doing chores around the house and didn't mind missing some of the audio.

John McCain, as much as I respect him and his service to this country, he shouldn't be reading anything for other people to listen to.....Sorry John.....