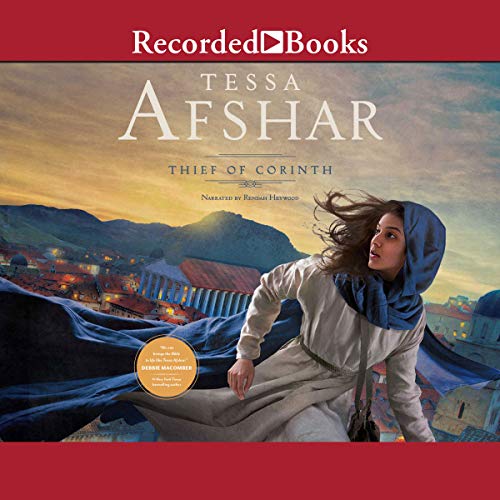 First-century Corinth is a city teeming with commerce and charm. It's also filled with danger and corruption - the perfect setting for Ariadne's greatest adventure.

After years spent living with her mother and oppressive grandfather in Athens, Ariadne runs away to her father's home in Corinth, only to discover the perilous secret that destroyed his marriage: Though a Greek of high birth, Galenos is the infamous thief who has been robbing the city's corrupt of their ill-gotten gains.

Desperate to keep him safe, Ariadne risks her good name, her freedom, and the love of the man she adores to become her father's apprentice. As her unusual athletic ability leads her into dangerous exploits, Ariadne discovers she secretly revels in playing with fire. But when the wrong person discovers their secret, Ariadne and her father find their future - and very lives - hanging in the balance.

When they befriend a Jewish rabbi named Paul, they realize his radical message challenges everything they've fought to build, yet offers something for which neither dared hope.

Be transported back in time by this gripping tale of adventure, bravery, and redemption, and discover why Debbie Macomber says, "No one brings the Bible to life like Tessa Afshar."

This is not Biblical history just because there’s mention of an Unknown God a Paul and Lydia the purple seller.
It is a modern -young adult- story placed in a ‘Bible times’ setting of Corinth and Athens. The author needs to do a lot more research to make an authentic sounding series of events.

Adored how the narrator slightly changed her voice, with each character! The plot was moving, realistic, and believable. Fast moving, without syrupy "stuck" parts.

Tessa Afshar again brilliantly integrates and explains Biblical history through great story telling. I am left with a more personable and loving picture of Paul the Apostle. The development of the characters and action in the story kept me reading. With every story of I read, I experience God's love more personally.

I won the kindle version in a Goodreads drawing and I purchased the audible version. Tessa Afshar is an excellent Biblical fiction author. I’ve received an additional blessing listening to her books, as I’ve grown even more intimate with our Lord. The narrator was outstanding as well. Looking forward to many more books by this author.

I so very much needed the Biblical truths in this fictional story. The way she portrays God's Word in one's everyday life is amazing! Very good story and thoroughly enjoyable! I have listened to and read every one of her books and love them all!

I have listened to this book 3 times now and still love it! I wish I had ten more like this waiting! I have also purchased the written book to give to friends who can't do audiobooks. Excellent, just excellent!

I love historical fiction but it’s rare to find one that is biblical, historical but also well written.

Tessa is a great writer. But she also faithfully represents the biblical characters she includes. Furthermore, the whole time period comes alive.

I look forward to the rest of her works!

Tessa Afshar has combined a great piece of fiction and weaves in Biblical narrative creating a delightful story. I was particularly taken by the background information on Corinth, which helps me understand the culture that Paul is writing to in his epistles to the Corinthians in the Bible.

The narration was beautifully done by Rendah Heywood. I have found her to be the best reader Ms. Afshar has used thus far.

while the book was engaging and well written, the ending had much to be desired. Did Tessa Asher write this story with a character in The Bible in mind?

Tessa is one who draws you in at the start. This book, like so many of her other books, just leaves the reader thankful to have been pulled away. The book is more than a good read🙌🏾💞

Loved this book. An interesting and unique story line. Beautiful work. I was sad when it was over.

What a sweet tale of overcoming adversity and struggle to find that the Lord will forgive and love you always.

Most beautiful language to tell a well crafted story. Good message that is timeless.loved it

I enjoy Tessa Afshar's humour in her stories. Nice light reading when you're not in the mood for anything heavy.

I Liked this book so much!.
Unfortunately I gave them four stars as an overall and in performance because sometimes the narrator changed her voice and sometimes I wonder if she were introducing a new character but in reality it was the same character who had just finished speaking in the previous chapter. Maybe is something to do with the way of the recording?
However, her intonation and reading made me to go deeper into the reading.
As always, Mrs. Afshar does a good job in her novels. Her message of forgiveness is clearly heard. Her ways of telling the historical events makes you believe everything.
The characters grew and developed.
In summary the novel is very good and I recommend it.

Difficult to turn off and stop listening

Great storyline, I really enjoyed /loved it. Found it hard to stop listening. I got a bit weary with the describing and comparing words but maybe that is more about me than the writer.

Loved it. Did not want it to finish.

Great story teller as always. Such an insight in to life in Corinth and what it was like for Paul to minister in this time.