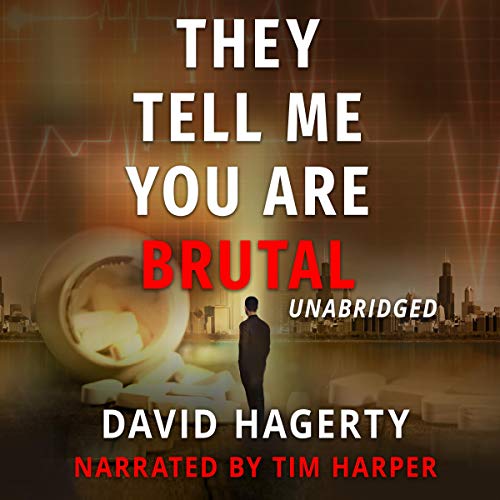 They Tell Me You Are Brutal

Lies convict, but the truth condemns.

When five people die from tainted pain medication, Governor Duncan Cochrane must lead the investigation. The clues quickly point to sabotage, threatening all the citizens of Chicago.

Meanwhile, his son’s drunken confession leaks to a journalist with an agenda. To protect his reputation and his family, Duncan keeps the boy by his side, yet he also needs to campaign for reelection.

Can he manage all three without sacrificing his family or his office?

Robert D. Knable says: "David Hagerty's novel is the third in a trilogy of crime fiction for the thinking person. Each setting is painted in rich detail to create a vivid scene. Each scene is crucial to telling the story. Characters often have back stories, leaving the reader to ponder the complexities of their personae, the most complex persona being that of Duncan Cochrane, his tragic protagonist. Yes, this is a page turner, but there is much to be gleaned from each page."

Evolved Publishing presents the third book in the series detailing Duncan Cochrane’s rise to prominence and the personal cost of his public ambitions.

What listeners say about They Tell Me You Are Brutal

This is a book about politics, family drama, and murder. I definitely enjoyed it from page one. I do not usually like things to do with politics but this was definitely an enjoyable book for me. The narrator was great and well suited to the book

I was surprised at how good this book was!

I did not expect to be drawn into a book about a crime fighting governor - especially after all the political chaos of 2020. I am a fan of Tim Harper's work as a narrator and he did not disappoint me. His concise delivery works well with the story of Duncan Cochrane, an embattled governor facing a deadly crisis during his re-election. There are references to the previous two books - but you can enjoy the story without reading the first two books. That being said, the plotting and character development will encourage reading more of David Hagerty's work. Well Done!

This is a terrific story about a politician torn between what is right and what is expedient. I won't say which he chooses, because that would spoil the fun. The book has some fun with the politics of politics, and ultimately resolves a mystery in a satisfying and surprising way.
The narration is superb. Well paced throughout, with a tone that matches the dark nature of the story. Looking forward to more from both the author and narrator.

A Poisoning in Chicago

'They Tell Me You Are Brutal' is the third book in David Hagerty's 'Duncan Cochrane' mystery series. This is my first book of the series I've read. I requested a free review copy of this audiobook and am now leaving a voluntary opinion.

Governor of Illinois, Duncan Cochrane, is reaching the end of his bid for re-election when a poisoner tampers with pain reliever pills, resulting in several deaths. This, along with the upcoming election and the family secret about his daughter's murder threatening to be revealed, puts Cochrane in a difficult ethical place. He's known for his law-and-order stance on crime and punishment yet is protecting someone close to him who committed a crime.

The three main plot threads start out disparately, and throughout the book slowly start to converge to a satisfying climax. Before starting the book, I was most interested in the investigation above the other major aspects -- the election and the family secret. Once I saw everything weaving together, I became much more involved with all of it.

I have to say that I did think it a little implausible that a governor could ignore other state business and involve himself so thoroughly in a criminal investigation, especially after the FBI takes over. Since I was pre-invested in the investigation parts of the book, I went along with it. The book is plotted well and the characters well-written, so I didn't have much problem with it.

I thought Tim Harper's narration was a bit monotone. This may have been by choice, but it did take me a while to get used to it. Overall, though, he delivers a good performance.

Politics, murder, and family drama make for an interesting tale.