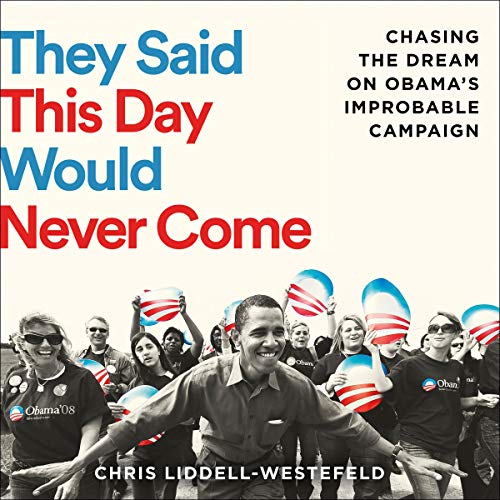 They Said This Day Would Never Come

They Said This Day Would Never Come

'They said this day would never come. They said our sights were set too high. They said this country was too divided, too disillusioned to ever come together around a common purpose. But on this January night, at this defining moment in history, you have done what the cynics said we couldn't do.' ­­(Barack Obama)

The thrilling, inspirational story of Obama's first presidential campaign, as told by those who lived it.

In the year leading up to the Iowa Caucuses, few thought a freshman senator named Barack Hussein Obama would be able to win the Democratic nomination - not to mention become the country's first black president.

But something was stirring. Hundreds of young people from all over the country, inspired by a message of hope and change, began assembling in Iowa. These 'kids' became the foundation of one of the most improbable presidential campaigns of our lifetime.

Featuring more than 200 interviews with alumni, volunteers, staffers, and President Obama himself, They Said This Day Would Never Come is a gripping and emotional oral history that takes listeners inside the campaign, following those kids as they worked 14-hour days and travelled thousands of miles, building networks of support for one of the most inspirational and successful campaigns in recent history.

This is a book full of hope.

They Said This Day Would Never Come is an intimate look at one of the most gripping presidential elections in history, and at how this extraordinary campaign shaped Obama's presidency and America itself.

What listeners say about They Said This Day Would Never Come

The story of the volunteers that came together to get Obama elected is an amazing one. This book really does give you a great sense of how they did it and not just what they went through, but individually what it meant to them. These are not professional voice actors, the author/narrator in particular tends to drop his voice so low by the end of sentences it's often almost a growl. obviously it leads to some flat recounting and the constant (and necessary) need to name each speaker just before they tell their story leads to a halting listen, but the story itself is incredible and the contextual clips of Obama speaking really helps you understand how brilliant an orator he was.
I would definitely recommend the book, though I feel ironically that the oral history of the campaign may be better in print.