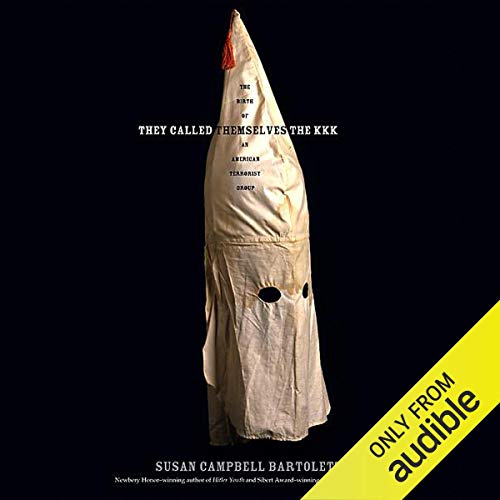 They Called Themselves the KKK

A thoroughly-documented, chilling history of one of the world’s most recognizable extremist groups, this is the true story of terrorism in America.

“Boys, let us get up a club.” With these chilling words, six restless young men raided the linens at a friend’s mansion, pulled pillowcases over their heads, hopped on horses, and cavorted through the streets of Pulaski, Tennessee. They called their new club the Ku Klux Klan, and it quickly grew into the self-proclaimed Invisible Empire, with secret dens spreading across the South.

Award-winning author Susan Campbell Bartoletti weaves together vivid personal accounts from oral histories, congressional documents, and diaries in this enlightening, surprising, and disquieting story, which has received a slew of starred reviews from Kirkus, Publisher’s Weekly, Booklist, and other esteemed publications. Her extensive research places the length of the Klan’s history into a larger context that sheds new light on the roots of hate groups.

When you purchase They Called Themselves the KKK, you’ll get exclusive bonus audio from a conversation with the author and Audie Award-winning narrator Dion Graham.

What listeners say about They Called Themselves the KKK

not about the kkk

this book hardly mentions the kkk. it instead describes the perils and difficult times of african americans during the reconstruction period post civil war in detail. it's quite interesting in that respect, but i wanted to hear how the kkk grew and why it still exists in america, etc. i feel it was advertised as something that it was not.

This is a well-researched recounting of the history of the KKK. I've read other books on the subject that were more comprehensive in scope, but went on to the point where it was difficult to remember the point of the books. This one is brief, to the point, and authoritative.

This is an interesting work but it is not the interesting work that the title or the blurb suggests. While the KKK arises in most of the stories in this work the emphasis is on the experiences of the others involved, principally their victims. I'm glad I've listened to it and will revisit it again in the future but , as has been said by other reviewers, I don't feel like I know much more about this group than I did before. You should listen to it because it portrays an important series of events but not because you think it will reveal much about the KKK

They Called Themselves th KKK

Would you consider the audio edition of They Called Themselves the KKK to be better than the print version?

I wished I could of seen thew images in the book, but loved lisening to it.

I liked the history behind the book. How much detail the author put into it.I absolutely loved this author's work.  She is a Newberry Honor-winning author of Hitler Youth and Sibert Award-winning author of Black Potatoes.   I want to read more of her books.

Afterr listening to it, it really made me think of how hard it was for ewveryone back after the war.

The beginning of the book:Boys, let us get up a club. With those words, six restless young men raided the linens at a friend’s mansion, pulled pillowcases over their heads, hopped on horses, and cavorted through the streets of Pulaski, Tennessee. The six friends named their club the Ku Klux Klan, and, all too quickly, their club grew into the self-proclaimed Invisible Empire with secret dens spread across the South.This is the story of how a secret terrorist group took root in America’s democracy. Filled with chilling and vivid personal accounts unearthed from oral histories, congressional documents, and diaries, it is a book to read and remember.The Ku Klux Klan arose after the Civil War and quickly became a terrorist organization spreading fear and hatred throughout the United States. This book traces the entire history of the KKK from its beginning as a "social club" to the modern day. Details about the founders and other members are given. Raids are described in enough detail to give the reader chills while imagining what it would be like to live through the terror. The book is well-researched and presents a number of people giving personal accounts about the impact of the KKK on their lives.  I thought the book was well done.

Very well researched and excellently written on the KKK. The narration is just inspiring and engaging.

it gives a profound and insightful look at American history as it relates to the formation of the OK and bone chilling recounts of what African-Americans went through.

My only complaint with this book is that it is too short. I wanted a lot more. I learned so much. And this is extremely important history that every American should learn.

Great details that show the hatred of the Klan and courage if Black and White people who opposed the racist ideology.

Great book...narration not so much (IMO)

First, I do have to say the narrator in my opinion ,made this great book difficult to listen to. If it wasn’t for the fact that I was enjoying book I would have ended listening.

I have to applaud the author for keeping everything RAW. Refreshing to read something of truth, that did not have more of the writer’s words vs the truth.

As I listened to the happenings I found myself shocked in some situations. As someone white I knew the history Pretty much & not from what the schools taught. Having a black woman who has been like a mom to me for over 34+ years, take me on a journey of life in her growing up years. I must add she actually is Milano, which added a whole other set of issues. Everything for her @ birth, she was born in Germany to a white woman. They hid in a hole until they could sneak her out, without her mother. As an infant somehow she ended up in south Carolina with her biological father. (Never saw her mother again)

Because of her I also spent a great and treasured time with the black community whom most were very welcoming, but there were a few who held the grudges of the past, that were not! But I’m glad to say that turned around. The thing that shocked me the most was the type of involvement that the left was involved.. I am not trying to make this a political thing by any means, but it made me look at today and do some serious thinking.
This is definitely a book that all should read.

Tough to Read but Good Information

This book is relatively short. It is a good primer on the origins of the KKK. The narrator is limited. It's easy to see why it would be appropriate for a black man to narrate this book. However, it takes a while to get used to his attempts at imitating a white southern accent. Most of the speakers are 19th century southern whites, and Graham (narrator) struggles with that.

An interesting history of the KKK, but not wildly exciting to listen to. The author gives a moving account of some of the horrendous activities of the KKK. It starts off holding attention, but tends to become boring as the book continues. Not a book I would listen to again.