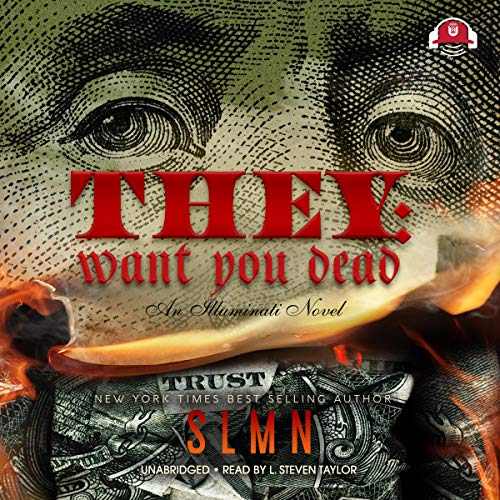 Dragged into a violent conspiracy, one woman learns how far the Illuminati will go to protect its secrets.

Teen sensation Melissa Jones is dragged into a world of conspiracy and violence when her boyfriend is shot dead by police. Melissa joins forces with unlikely allies in a desperate search to uncover the shocking truth behind his murder. Her unlikely allies include a newly elected senator who refuses to be compromised by a wealthy donor, a conspiracy theorist who believes the worst of all enemies has infiltrated the corridors of power, and a Black Lives Matter leader who seeks justice for her brother's murder. Together, the four of them share a common enemy, magnate Lionel Granger, who will stop at nothing to protect the secrets of the Illuminati.

First blood has been spilled. More will flow. This is what happens when they want you dead.

What listeners say about They

Good up until the ending, which was so far fetched it pretty much ruined the entire experi ene.

Wow! This was a captivating story. The only character I thought unrealistic was Bruce towards the end. Overall, I thoroughly enjoyed it!

The Illuminati was used as an excuse to write a BLM/SJW piece. I listened to it all and kept waiting for the actual Illuminati to be part of the story. However, it never really happened and the villain could have been any rich guy with an agenda. The hero was way too young and the plot culminated in a ridiculous fashion.

The reader is good but that's it. Beyond that it's just BLM propaganda. 4 hrs in and no mention of the illuminati.

I loved this audiobook, the narrator was really amazing, gave me goosebumps a few times

this book is so amazing with a great ending. real eye opener. of u don't think the elite is doing this u will after this book

Some reviewed this book before me and did not like it. but after listening to it, I feel it ties in too much so will today's times. The events that were happening some events just happen like that this past month or so. I really had to see when it was published. 3 yrs ago. Wow, we have had protest and marching, because deaths caused by police officers. I could not believe this book was not just made. true the plot was kind of movieish, but also kind of cute in a teen way.