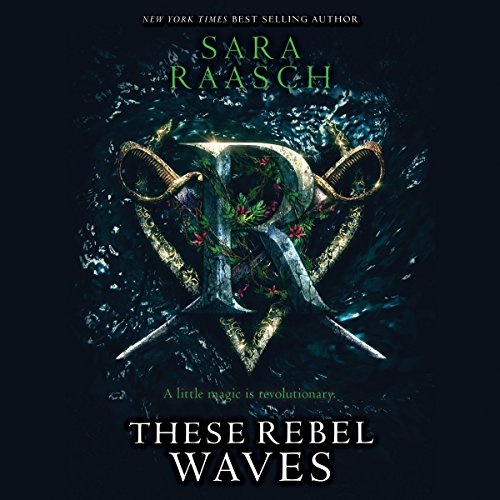 A thrilling new fantasy series - full of deadly magic, double crosses, and a dangerous quest in a new world - from Sara Raasch, the New York Times best-selling author of the Snow Like Ashes series

Adeluna is a soldier. Five years ago, she helped the magic-rich island of Grace Loray overthrow its oppressor, Argrid, a country ruled by religion.

But adjusting to postwar life has not been easy. When an Argridian delegate vanishes during peace talks with Grace Loray’s new Council, Argrid demands brutal justice - but Lu suspects something dangerous is at work.

Devereux is a pirate. As one of the stream raiders who run rampant on Grace Loray, he scavenges the island’s magic plants and sells them on the black market. But after Argrid accuses raiders of the diplomat’s abduction, Vex becomes a target. An expert navigator, he agrees to help Lu find the Argridian - but the truth they uncover could be deadlier than any war.

Benat is a heretic. The crown prince of Argrid, he harbors a secret obsession with Grace Loray’s forbidden magic. When Ben’s father, the king, gives him the shocking task of reversing Argrid’s fear of magic, Ben has to decide if one prince can change a devout country - or if he’s building his own pyre.

As conspiracies arise, Lu, Vex, and Ben will have to decide who they really are...and what they are willing to become for peace.

"Full of mesmerizing magic, political intrigue plotted in dark grottos, and a cast of sharp-witted rogues, These Rebel Waves swashbuckled its way into my heart and never let go. Raasch has outdone herself with this new series. You won’t want to put it down.” (Evelyn Skye, New York Times best-selling author of The Crown’s Game and The Crown’s Fate)

What listeners say about These Rebel Waves

thoughts on these revel waves

This book had a lot going on in it. Alot of action, a bit of romance, family dynamics that have your head spin, illness that has your jaw drop when you find out what causes this illness and unusual alliances.

Ben’s dad is whacked. Totally and completely whacked. The dude believes too much in himself and doesn’t care how he goes about achieving his goals for his church and country. He is power hungry. lt’s scary the lengths he goes to for things it was just wow. You wonder how Ben can be related to him because he is more thoughtful and mindful of things. I love how he is with people and how he genuinely cares. He is the best character to me. Ben shows the most growth and so glad he is considered a heretic to his crown. He is too good to be with his dad on things.

Lu I waffled on. she was high and mighty on some things. She looked down and judged people and yet she didn’t want others doing that to her and she was blind to the systems around her. I did feel for her though. She was used alot in that first war and it has resulted in her not being as trusting and kind as she could be.

Devereux was interesting but you kind of expected him to be the sarcastic one. He had walls up that were there for good reason but he did need to see beyond those if he was going to get somewhere other than prison. I loved how jaded he was though. It made for some fun moments. Him and Lu were funny together. They bashed heads more often than not.

The plot needed more fleshing as did the world building. We had too much going on to really know the plot as a whole. It was the kidnapping of a diplomat but we also had Ben’s task on the reversal of the fear of magic, the unraveling of Lu’s beliefs in her country’s system, the secrets so many held, watching Ben being part of the game for his dad, Lu and Devereux’s relationship and their survival but also all that they find out. So much going on that you sometimes don’t know what is what. The world building wasn’t really all there. We were told about factions and islands but not much else. We know about the war but why did this war create such a divide. We don’t really get a background so we can have a feel some of the animosity and anger.

Overall the book is good. I am eager to see how Ben fares in all this and if he will be able to love freely who he does. I hate seeing his eyes open and all the betrayal and how he is feeling like he is a pawn because he is a good guy. I loved the story of Ben and what he was doing. That had me smile because he was so unlike his dad. I liked that this was in third person because it would have been way to confusing to follow if it wasn’t. I nice beginning to the series.

loved this book. flew right through the whole thing!!! im reading the 2nd one now!!!

Love the story, not the narrator

I listen to my audio books on 1.25 speed, and I still found this narration too slow. I really didn’t like her tone or inflection or characters, so it took me a bit to get into. Once I got past her tho, I loved the book and plot overall.

This is my first time reading this authors books and I have to say it was really good. She did a great job writing this book and the narrator did a excellent job as well.

it's hard to find a great teen fantasy book that isn't annoying and predictable, but this book is neither of those things!! I cannot wait for book two.