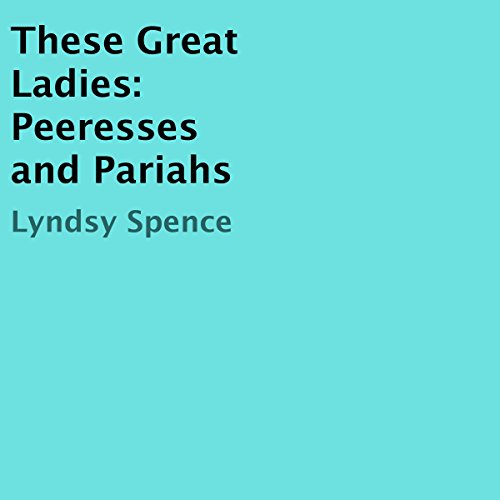 "Oh dear," said Evelyn Waugh of his society friends, "these great ladies." In this book of pen portraits the listener is introduced to obscure ladies who were society stars in their day. From the Churchills to the Mitfords, British and European Royals, to international playboys and film stars, these ladies knew everyone. And everyone knew them, for better or worse. Margaret, Duchess of Argyll: Famous for her naughty polaroids, and whose divorce from her Duke saw 88 men named as her lovers. Mariga Guinness: A bewitching German princess with a harrowing childhood, who fought to preserve Irish buildings and became an icon in the process. Sylvia Ashley: A girl from the wrong side of the tracks who married two lords, two Hollywood stars, and a Russian prince. Joan Wyndham: A bohemian aristocrat who shunned a debutante existence to live a life of debauchery in Chelsea. Enid Lindeman: An Australian wine heiress who married four rich and titled men, and buried them all. Venetia Montagu: A society girl who moved at the centre of HH Asquith's wartime government. Irene Curzon: A "poor little rich girl" who dared to break the rules. Jean Massereene: A dazzling viscountess whose association with Sir Edward Carson almost ruined her reputation. A true eccentric, fashion icon, and champion of the spiritualist movement.

What listeners say about These Great Ladies