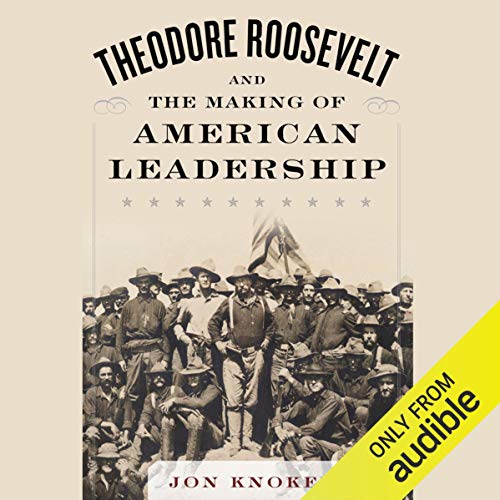 Theodore Roosevelt and the Making of American Leadership

This is the story of perhaps the greatest leadership journey in American history.

President Theodore Roosevelt forever transformed America, ushering the country into the arena of world supremacy. His brand of leadership was entirely American: confident, compassionate, energetic, diverse, visionary. But Roosevelt was not a born leader; his ascent to the apex of power was not a foregone conclusion. He made himself a leader of consequence, and it is his epic journey to the White House - a road filled with terrific failures, intimate introspection, and self-made luck - that will inspire listeners anew. No author has combined his key biographical milestones - the lessons born from the contradictions of his life - with the surviving stories from those who followed and interacted with him in his various attempts to lead.

While a graduate student at Harvard, author Jon Knokey, a Roosevelt historian and business leader, unearthed hundreds of unpublished letters and interview notes from Roosevelt contemporaries. These long-forgotten documents provide a fresh and stunning ringside seat along the 26th president's journey to 1600 Pennsylvania Avenue. The stories from Harvard chaps, idealistic political reformers from New York, coarse cowboys from the Badlands, and tough-as-rawhide Rough Riders from the nation's interior all combine to illuminate the maturation process of a man learning to lead at every stage of his life. The story of Theodore Roosevelt's life has been told before. The story of his leadership journey has not - until now.

Fast paced and written as a biographical narrative, Theodore Roosevelt and the Making of American Leadership places the listener alongside a young Roosevelt as he shapes events, people, and himself to forever change a country. He created an authentic style of American leadership - a style that has endured for over a century.

well presented story of a great man. Roosevelt had an inspirational attitude to life and its problems.

Absolutely one of the best books I have encountered. Truly grabs the readers attention and puts you right there getting action with TR. The detail and scenery is perfect, couldn't have asked for a better lesson in leadership.

Without a doubt, this is the best book on Theodore Roosevelt and leadership in general. The 2nd half is nothing short of a historical masterpiece. It belongs in every library. There are many parts when you feel like you are there with him as he leads by example.

This is a great book. I have read multiple books on TR and it has been hard lately to learn new information on him. This book has numerous bits of information that was previously unknown to me. The excitement of the author on the topic is palpable. Highly recommended this book.

My education didn’t include much history and even if it had I’m sure I would not be been as interested as I am now.
Over the years I have heard small snippets of his life but never the depth as covered in this book.
I truly believe we will never see a leader like Teddy Roosevelt again. He truly shaped the destiny of the US.

A second listen in worth it.

As for books that cover the topic of leadership Theodore Roosevelt certainly became a great leader. Very much like Churchill.

How many times can you mention Harvard?

I've read/listened to over a dozen TR books struggled to finish this one. It was hard to not hear a tone of self-aggrandizing by the author, though he never mentions himself. Hard to explain, but the tone was just off-putting.

The narration is wonderful and vigorous like the man it is about. one and only Teddy Roosevelt.

Fantastic listen. It was so refreshing to see a public figure in such a positive way. It gives us hope for the future

Jon Knokey does an incredible job giving a detailed and accurate account of Roosevelt's life. His writing is authentic and I learned more about this great American leader than I could have imagined. I am anxious to listen to this book again, and even more excited and hope Knokey writes another book.

I enjoyed the book. It kept my interest the whole way through. I will probably listen to it again.

Engaging listen and insightful account of Roosevelt's road to leadership

This book gives great insight into the events and lessons (good & bad) that shaped such an effective leader. It highlights Roosevelt's strength of character and persistence in the face of adversity through a balanced account of real events, not just exaggerated stories. This makes it relatable, inspiring and a great read.

as said already good read, very insightful well read took a lot from it. will be reading it again