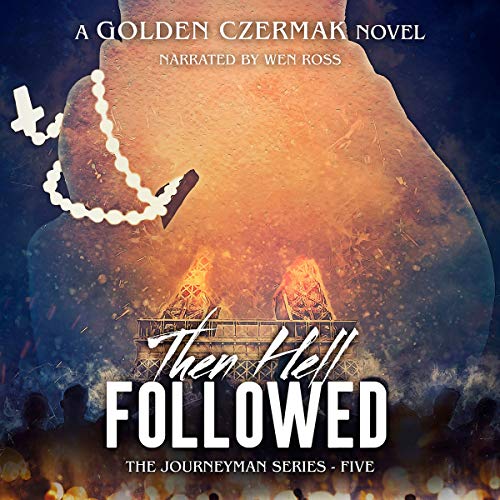 Warning: This book is for mature listeners only. Not for children. It contains adult themes, violence, coarse language, sexual situations, nudity, and paranormal themes.

From author Golden Czermak comes the penultimate installment of the captivating Journeyman Series. Emboldened, Dajjal's forces have begun attacking openly in the streets, spreading fear and pain across the globe. The Order prepares to counter the Infernal Tide in Paris, else be swept away in its fiery waves. Meanwhile, Marcus must overcome past issues with his brother Ty while they search for a cure to heal the love of his life. The road leads them to the mysterious commune of Rennes-le-Chateau in France. All was going so well, then Hell followed with its own moves, threatening the world with eternal fire and shade.

I have sooo many questions…

Oh my god, how am I to survive until the next audiobook installment!?
If you’re a fan of this series … Read this BOOK.. So much happens.

I can’t say more than OMG.. What, who, why?
I don’t want to give anything away. I just need a hug I think.

Where is my hubby.. oh hubby come hug me Golden has destroyed my heart!

Once again, Golden and Wen have come together to tell a great story. I love this series and can’t wait to read the next one!

The journeyman are bound to be the death of me but at least I'll die having met them and having known the incredible talents of Golden Czermak!!! I have read alot of books in my time but the ability Golden has to tug at heartstrings and make you feel every breathtakingly painful and beautiful moment while conjuring images of the scenes he's written is nothing short of amazing!!! I couldn't have chosen better narrators for this series and honestly nobody else could have done it justice!!!!

Wow, this series just gets better and better! I can’t wait for the conclusion, great storyline, very emotional at times.