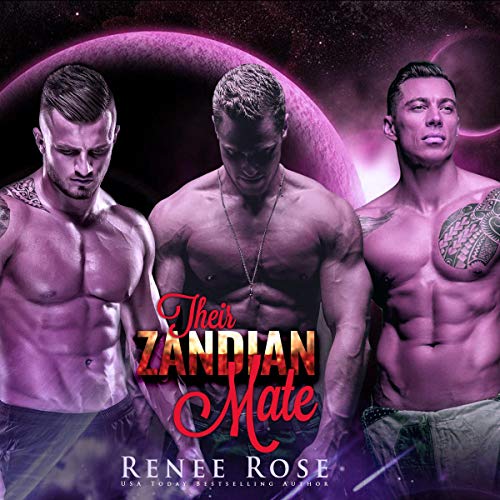 Note: This reverse-harem short story was originally published in the USA Today best-seller Alien Alphas. It is a stand-alone story in the interconnected Zandian Masters and Zandian Brides series.

What listeners say about Their Zandian Mate

I love all the Zandian books... I have them all in Kindle and in Audio. This series has everything, suspense, well developed worlds, great male as well as female characters. I love how the characters actually interact between books, so you can follow along with glimpses of previously loved people! Renee has a way of story writing that brings you with her you can get fully immersed in her worlds I always want more! Laughter, sadness, hope... she takes you through a full run of emotions! And yea, I do enjoy the discipline scenes, she does them well!

In the 8 Zandian Masters titles the narrator is Jiraiya Addams... and he is AWESOME! I usually avoid this genre of books narrated by males because they seem to have trouble with female voices. Jiraiya was able to perform all the voices with a smoothness and believability that made the books so great to listen to. He brought excitement, tension, and heat!

I can't wait to hear more of Renee's books with Jiraiya!

My first Zandian story and I am impressed that they don't judge. I think she would've been satisfied with the freedom to raise her children in peace but who could resist these very tender-hearted warriors. This is steamy and the plot was interestingly enough even without having read any of the others. I think the narrator does a good job with the multiple character voice changes in sound and intensity..

What happens when Eslyn capture her warriors’ hearts?

Their Zandian Mate is the first book in the Zandian Brides series, and while it can stand alone, there are events referenced in a previous book in the Zandian Masters series. Eslyn is one of the precious few Zandian females left, but she’s coming from abusive mates and is on trial for their actions. Next thing she knows, Eslyn is given to three Zandian warriors, Granit, Laake, and Damon. They must punish her, teach her true Zandian values, but what happens when Eslyn and her children capture their hearts?

Oh my goodness, I loved this little short story! I really wanted more! I loved being back in the Zandian world, but I really loved Eslyn and her connection to her new warriors. She’s often scared, but shows a brave face, she knows she’s done wrong and wants to atone for her actions, but I loved most that even though she came from an awful pairing, she wanting to find happiness, protection, and love! Her three warriors were all different, but all brought something that Eslyn needed. Their scenes were quite steamy, full of stern and tenderness, and I loved the males’ interactions with the children! I think that Mr. Addams did a fantastic job, again, with bringing the Zandians to life, and I felt like I was right there with these characters! This book is short, but sweet and steamy, and a great start to a new side series!

3 hot Zandian males assigned to one female to recondition her to live in their society. Great short story wonderful narration

I really enjoyed this book! Although it is shorter than I usually get, I couldn't resist getting it. The narrator's voice was compelling. I'm waiting for more books in this series.

Full circle story regarding the one Zandian female found on Zandia. Glad she was able to find a happy ending after a hard life

Love in the Stars!!

Zandians females are scarce. Only 3 known surviving females for an entire race of males. Reverse harems are the norm for their species and they treat their females with honor and love as well as with a little punishment.

This novella in the series is great. I loved listening to this story by Jiraiya Addams!

I love the Zandian's!!! Another great story. This is a short story. Eslyn is freed from three abusive males, and she is being guarded by Granit, Laake and Damon. The three warriors think Eslyn is beautiful and they want to keep her and her young. Narrator Jiraiya Addams did a wonderful job with the characters and story.

So...this was the story that introduced me to the series. I had read it as part of an anthology. I am glad I was able to get my hands on the audiobook as well. It's on the shorter side but still, I think the author did a good job with the story. It got me interested enough in the series. Still working my way through it of course but since this was the first book in the series I came across, it holds a special place in my heart. Besides, all the alphaness and sexiness from the three heros, who wouldn't enjoy this story? The female though, some may find not so likeable. However considering her past, it's also understandable. Might have some triggers for anyone who has experienced DV so please beware.