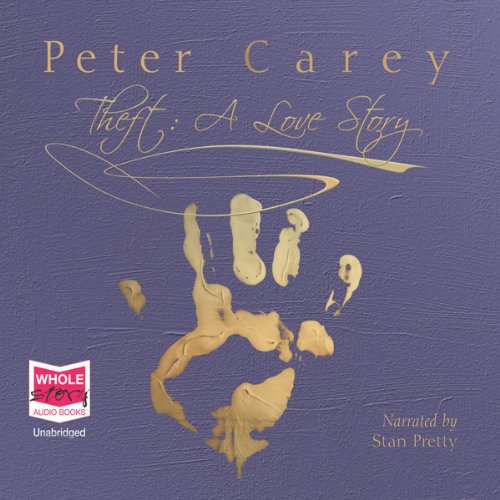 Michael "Butcher" Boone is an ex-"really famous" painter, now reduced to living in the remote country house of his biggest collector and acting as caretaker for his younger brother, Hugh, a damaged man of imposing physicality and childlike emotions. Together, they've forged a delicate equilibrium, a balance instantly destroyed when a mysterious young woman named Marlene walks out of a rainstorm and into their lives. Beautiful, smart, and ambitious, she's also the daughter-in-law of the late, great painter Jacques Liebovitz, one of Butcher's earliest influences. She's sweet to Hugh and falls in love with Butcher, and they reciprocate in kind. And she sets in motion a chain of events that could be the making, or the ruin, of them all.

"A magnificent creation." ( New Yorker)
"A funny, gorgeous steal of a book." ( Sunday Telegraph)
"A new Peter Carey novel is a cause for joy." ( Guardian)

What listeners say about Theft

This grew on me.

At first I wasn't too sure about this book, especially the Aussie accent. But once the characters started to develop and I got used to the accent, I really enjoyed it. The slow-witted brother was great! This isn't a typical type of book, and is worth the listen. I think the performance enhanced the story.

Unfortunatley I can't get to grips with this narrators style of speech, so however good the story is, I can't get into it, I have tried many times to listen to this, but still I get annoyed with it within a few minutes and turn it off.
Best advice, -listen to the sample before you buy this.

I finished this a month ago and I still miss the characters. I can feel their loss like that of a close family member! The narration is fantastic, drawing you into the distinctly loveable, flawed characters.

Very well told story in two voices, entertaining and quick moving.
The intricacies of the art world got a little confusing at times (probably more to do with my inattention rather than the story itself) but it certainly is a story centred around a story of real developing love and deep rooted love between the brothers which is an endlessly fascinating relationship and perfectly plausible.
very good though long. Very much worth the effort.

As dry as a pommie's bath mat

This cobber is the executive director of the Master of Fine Arts in Creative Writing program at Hunter College, part of the City University of New York - which means he makes his moolah by teaching creative writing.
Carey - fairy....scarey....hairy?
Wary is the word - the only audio book I've not managed to finish.

An intricate, tapestry of love (in many forms) art, psychopathy, but not a heavy listen. Narrator brilliant too.

Narration style and bad language not for me

Would you ever listen to anything by Peter Carey again?

I have listened to a number of Carey's book and generally enjoy them. The continuous use of swear words I found unacceptable

His slow measured tone had me switching off after 5 - 10 minutes. I tried increasing the speed but that did not help at all

If you could play editor, what scene or scenes would you have cut from Theft?

Not having read more that 1 hour I cannot comment

Just not for me sorry