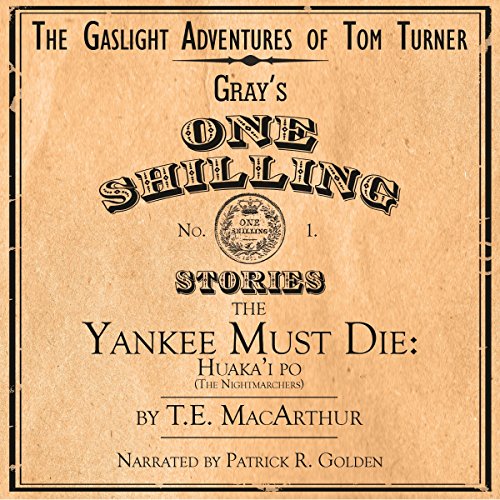 The Yankee Must Die: Huaka'i Po

August of 1883, the volcano Krakatoa erupted with terrifying violence and caused a catastrophe few survived - lucky Tom Turner was one of those few. A Civil War veteran, intelligencer, and former first mate aboard Robur the Conqueror's magnificent airship, the Albatross, Turner was a reluctant Devil. Having escaped the destruction of Krakatoa should have been enough adventure. But not for Turner. Now he'll have to confront the consequences of his past and those who want the secrets he alone holds. Murderous pirates, ruthless French scientists, erupting Hawaiian volcanoes, and the deadly Huaka'i po (the Nightmarchers) all stand between Turner and home.

No man can be that lucky?

The Volcano Lady, Volumes I and II, told only part of Tom Turner's story. Now The Yankee Must Die - Gaslight Adventures of Tom Turner (in three novellas) reveals the rest of his adventures. Can he escape his past or will he die at the hands of bio-mechanical assassins? Turner dreams of the day he might be reunited with the only woman to captivate his heart - Victorian volcanologist Lettie Gantry - if only he can survive again and again, against all chances. But this is lucky Tom Turner.

This is T.E. MacArthur's latest installment from the Volcano Lady universe: an exciting blend of historical fact and steam-powered fiction - plus a healthy dose of Jules Verne himself.

What listeners say about The Yankee Must Die: Huaka'i Po

Great to read, awesome to listen to!

Would you consider the audio edition of The Yankee Must Die: Huaka'i Po to be better than the print version?

I like them both. I wouldn't consider one better than the other. They're both AWESOME!

What other book might you compare The Yankee Must Die: Huaka'i Po to and why?

I would compare it to the old pulp serials...the cliffhanger alone will take your breath away...

What about Patrick R. Golden’s performance did you like?

What a voice... all the accents. He's exactly what I thought Tom would sound like. I would love to hear more books (especially the next two in the series) read by Mr. Golden!

Well written and well voiced... Everything I hoped it would be.

I loved Huaka'i Po just in print, but this reading brings a whole new dimension to it. You will not regret getting this one!