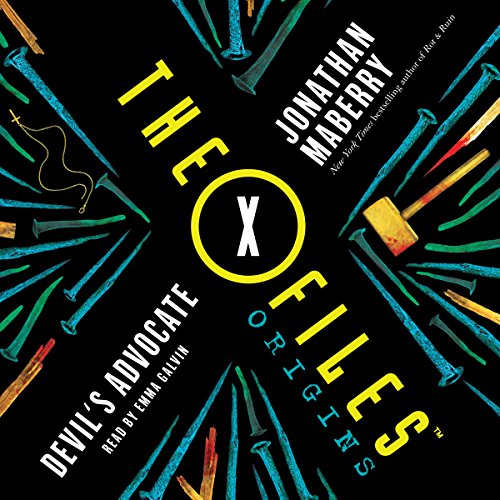 How did Fox Mulder become a believer? How did Dana Scully become a skeptic? The X-Files Origins has the answers in this young adult origin story.

The X-Files Origins: Devil's Advocate explores the teen years of Dana Scully, the beloved character depicted in the cult-favorite TV show The X-Files. Her story is set in the spring of 1979, when serial murder, the occult, and government conspiracy were highlighted in the news. The book follows Scully as she experiences life-changing events that set her on the path to becoming an FBI agent.

What listeners say about The X-Files Origins: Devil's Advocate

love this book, the narration is putting me to zzz

Seriously what a bad narration to a good book. I was losing my patience with the narration.

Did they ever watch a episode of x files?

The whole book Scully is a psychic who believes it all without question? Then at the very end decides nah I’ll be skeptical. I get trying do something original but that’s not the character at all. How could this book have gone so poorly while the Mulder book was so great.

it was a great story to listen, however the voice was too weird. almost made me drop the book several times. she reads ALL sentences in a rising a falling curve. regardless of the meaning or story. dialogues are a bit better, but general descriptions are very painful. hope the narrator will grow for the next book.

For X-File newbies, you'll like this story. For X-File veterans, the story tries to tie together some threads that we see in the series, and tell a story that makes Scully the "believer." At one point Scully says, and then repeats, "I want to believe." Doesn't really match what we know about Scully, but I enjoyed the story nonetheless. In short, it attempts to explain: 1) Why Scully is so jaded about pseudoscience and relies on rational, hard evidence; 2) Why she went into the medical field; 3) Why she needs, yet questions religion; and 4) Why the Syndicate would put Scully, specifically Scully, on the X-Files with Mulder once she became an Agency asset. The weak point of this audiobook is the narration. I bought the audiobook immediately upon release, but stopped listening and bought the physical book to finish instead. That's how terrible the narration is. Ms. Galvin ends nearly every sentence with a questioning intonation or a dramatic rise, and until the very last sentence of the book puts the wrong emphasis on the the wrong syllable of words, or the wrong words within a sentence. She does this every sentence. It's so distracting that I decided to read the book myself just so I could focus on the story. I later finished the audiobook on a long drive and found myself trying to mimic the horribly intoned sentences and mispronounced words. Like boutique. Who doesn't know how to pronounce boutique! (Especially Monty Python fans.) The most egregious mispronunciation was "sure." The word feels like it appears several times in every chapter, and she pronounces is as "shore" every time. (This, of course, could be an accent and, as such, is completely forgivable, but "boutique" is so universal amongst English-speaking peoples, that the mispronunciation of it can't be explained away.) In any case, I like the narrator's voice, it's very pleasing, it's just the unforgivable mispronunciations and inexplicably misplaced emphasis sentence-after-sentence that detracted from the flow of the story and my enjoyment of it. Otherwise, it's good to have some new X-Files novels to read or listen to, and the story is enjoyable if you think of it as aimed at a young adult audience that hasn't memorized the series and films. Enjoy!

PS: Here's my one and only X-phile nerd rant: (Slight spoiler ahead.) There's an injury sustained by Scully in the finale, which the author uses for dramatic effect, that would be clearly visible in the first episode of the series (Pilot). The author either didn't bother watching the series, or just didn't care. Scars like the one described wouldn't heal in such a way as to be invisible to a TV camera filming inches away from her abdomen in the very first PILOT episode. One of the most iconic scenes of the entire franchise and we're supposed to believe that Scully sustains an injury on her abdomen that's not clearly visible in that scene?! For shame.

The narrator has an annoying repeating cadence and rythm, as if she only has one ways of delivering sentences, after a few pages you can predict how shes going to weigh each word and i dont get immersed as much as i did in the first book in this series.

Other than that, good stuff.

I found it very entertaining and it was narrated very well! However, I did think the storyline was rather predictable.

Great book, not so great narration

I saw on the reviews most people said the same thing, I was able to get through the book with no problem, but Emma’s voice is not the right fit.

did not care for the narrator and the story dragged. Did not keep me interested.

It starts a bit slow but then its a fast paced race to the end. Then we get left with basically a cliffhanger. Lets hope for a few more in the series!

A classic, just like Moulder's origins story. Enjoyed from start to finish within two days

Not xFiles in the slightest

a book has to be monumentally bad or wrong for me to comment. this book is not really an xFiles store, more of a non-cannon teenage Dana Scilly story that breaks most of her past into something that has forked out of character and more akin to something Fox might have had happen. As a non-Xfile story, is ok if bland and uneventful reading is anything to go by, if an xFiles story was what you was after this isn't it.